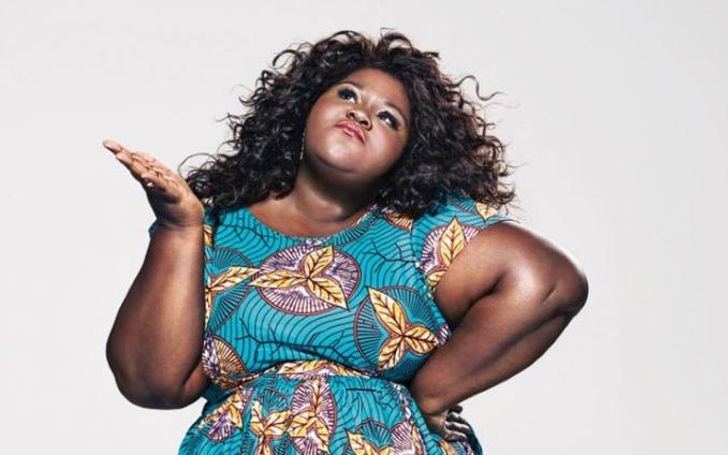 Here are all the details about Gabourey Sidibe's weight loss!

The name Gabourey Sidibe might not ring any bells. That's because you've always known her as Precious from the 2009 indie drama movie of the same name. The journey of a 16 years old overweight girl subjected to physical and verbal abuse from her mother and raped by her father resulting in two pregnancies turning her life around after transferring to an alternative school, sure touched hearts of millions.

Gabourey Sidibe stared her acting career as Precious in the 2009 movie of the same name.
Source: Pinterest

Based on the Novel 'Push' by Sapphire, the movie made almost six times the amount of its original production budget and sent Gabourey shooting through the universe of Hollywood stardom. The actress's recent works featured her in the 'Empire' series as 'Becky' and 'American Horror Story' series as 'Queenie/Regina Ross.' With such influential messages that she sends out portraying her roles, Sidibe is one of Hollywood's most precious gems.

Despite giving her best no matter what, Gabourey's career has not been without struggles. Most related to, you guessed it, her weight. So the actress set out on her journey to shed some of the excessive pounds.

Believe it or not, Gabourey Sidibe - who boasts a net worth of $6 million - weighted over 300 pounds when she first appeared in her first movie in 2009, 'Precious'. The actress admitted that she was never exactly a small child, and her diet started at the mere age of six.

Opening up to Oprah while promoting her movie 'Precious,' Gabourey said,

It's something I've had to work at. My first diet started when I was six years old. I've never been a small girl. One day I had to sit down with myself and decide that I loved myself no matter what my body looked like and what other people thought about my body.

The actress also revealed that getting used to her own skin took some time, which happened when she was 21 or 22 years old. But Sidibe still kept on at it trying to lose a few stones the natural way.

You Might Like: Does Gabourey Sidibe Have a Husband? Grab All the details of her Relationship History!

You Should Really Quit The Business

It's not something unfamiliar that Hollywood is a ruthless place for overweight actresses. The concept might have become subjective now, although this wasn't always the case. Nevertheless, Gabourey's confidence remained unshaken thought tested a million times.

Gabourey Sidibe revealed that Joan Cusack told her to quit the Hollywood business because of her weight.
Source: StyleBistro

The biggest disappointment came when Gabourey's idol Joan Cusack asked her to quit the industry because of her weight. While Joan, the voice behind Toy Story's 'Jessie,' didn't mean it out of a wrong place, it was still enough to scar Gabourey's heart.

In the interview with Andy Cohen, she divulged in Watch What Happens,

What celebrity was I disappointed by? Oh, and it's not in a mean way, because I know that she meant well. I met Joan Cusack, who is my favorite favorite -- I love her -- but, it was before I became [famous] or whatever. I was at some industry party, and she says, 'Are you an actress?' And I said, 'Yeah!' And she says, 'Oh honey, you should really quit the business, it's so image-conscious.

Cusack's response, however, wasn't as mean as Howard Stern's comment when he called Sidibe enormous and the size of a planet. Not just that, Stern even had the nerve to say that everyone was pretending Gabourey was part of the show business, and she was never going to be in another movie.

When the natural way didn't pan out for the actress, Gabourey resorted to Laparoscopic Bariatric Surgery in 2016. Afraid of meeting the same fate as her brother, who had Type 2 Diabetes, the Empire actress said that surgery was an easy option for her.

The medical experts cut her stomach in half, which limited Sidibe's hunger and capacity to eat. Sidibe confessed,

I'll take it! (And) my lifelong relationship with food had to change. The surgery wasn't the easy way out. I wasn't cheating by getting it done, (because) I wouldn't have been able to lose as much weight as I've lost without the surgery.

Not only was she very open about her experience, she even wrote a book about it.

This Is Just My Face; Try Not To Stare

Gabourey Sidibe assembled all of her weight loss stories and jotted it down in her memoir. Although most celebrities would rather keep body modification surgeries under wraps, the 'Come As You Are' actress was quite upfront about hers.

Recommended: Renee Zellweger Plastic Surgery - Everything She Said Against the Rumors

There exists fallacy around Sidibe's weight loss; it was all because she went under the knife which isn't true. The 36 years old actress works out and follows through diet routines to keep her weight under control. The life long combat with her weight issue and her practices to keep it down are all penned down in her book.

Sidibe's book This Is Just My Face; Try Not To Stare came out in 2017.
Source: StephanieCohenNYC.com

Sidibe's book, This Is Just My Face; Try Not To Stare, came out in 2017 and was well received by a lot. Even the harshest critics gave some of the best reviews for her writing.

The name Gabourey Sidibe is an inspiration, not just for plus-sized women but also for well-organized women who wish to make it big in the Hollywood industry.

For more articles on celebrity health, head on over to Idol Persona.