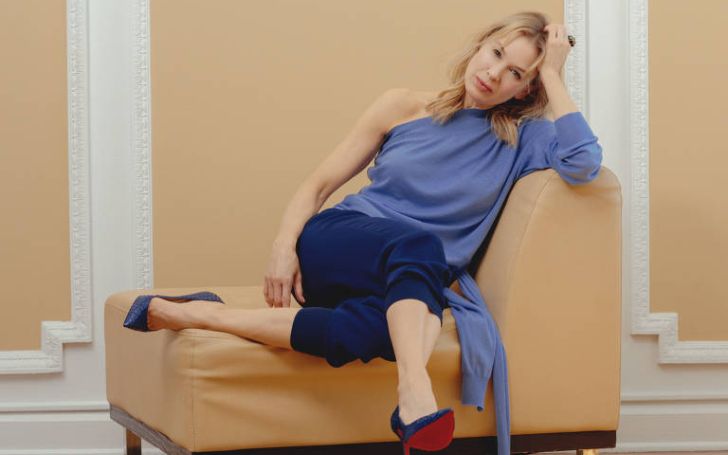 There were a lot of negativity surrounding Renée Zellweger in much of early part of the last decade. It seems she took all of it extra seriously. So seriously in that, in fact, she took a break from acting altogether from 2010 to 2016. Her last movie before the break was ‘My Own Love Song’ and she returned with ‘Bridget Jones’s Baby’.

The 50-year-old was even stronger for portraying the legendary Judy Garland in her star movie, ‘Judy’. There’s even talks of an Oscar coming up. But while the drastic 20 lbs. weight loss within a year in early 2000s was a kind of a shocker, her face went unrecognizable after 2010.

Zellweger might have thinned out for ‘Judy’ as well.
Source: Pathe UK

Of course, the change prompted the talk of a possible plastic surgery operation on her face. And even though Hollywood broke her, she got back stronger.

No one had seen Zellweger properly for a long time before she appeared at ‘Elle Magazine’s Women in Hollywood’ celebration event on the night of October 20, 2014, in Beverly Hills. And almost no one did either. There was new Renée Zellweger on the red carpet smiling with that same blonde hair, but a different face.

The New York Times described her face like this, “Ms. Zellweger’s forehead was as smooth as a packed ski slope, and her eyes as crystal-blue as ever, but they appeared, in some images, wide and round as pennies.”

Renée Zellweger before 2010 and during her appearance at Elle Magazine’s Women in Hollywood’ celebration.
Source: ‘Case 39’/Mario Anzuoni, Reuters

As soon as her pictures went up on the internet that night, each of the so-called media outlets were making articles about her new face. No, all of them were not critical of her changing persona. There were several, if not every, news outlets defending her.

It was not the case for bullying her to get the truth out. It’s just that all those earlier years, people have seen the “quirkily pretty, Kewpie-doll star” and made them put themselves in the shoes of the characters she portrayed in the past. She was not Renée Zellweger anymore.

She Claimed She Was Living a Happy Life, But Then Came the Theories on Possible Procedures

Immediately after the Elle party, she also shared her own thoughts on the general public’s comment on her face. It was not as you’d expect a celebrity to respond with after all such rumors. I’m glad folks think I look different!” she told People. “I’m living a different, happy, more fulfilling life, and I’m thrilled that perhaps it shows.”

The ‘Bridget Jones’ actor called the conversation about her appearance ‘silly’, stating, “It seems the folks who come digging around for some nefarious truth which doesn’t exist won’t get off my porch until I answer the door.” She was really comfortable with her skin, so her friends viewed her.

Zellweger was indifferent to people talking about her face.
Source: Reuters

As for expert opinion, Dr. Michelle Copeland of NYC had some possible theories of the plastic surgery procedures she might have done — probably a blepharoplasty, or upper eyelid lift, and possibly also a forehead lift, with the addition of injectable fillers that may have widened the planes of her face. There also was the possibility of laser or ultrasound procedures.

In contrast to some bizarre and extreme plastic surgeries that others have opted, however, Dr. Nancy Etcoff says, “This is about a lot of subtle changes that add up to a person who no longer looks like our memory of them.”

Yes, there’s a whole frigging article about her talking about the tabloids discussing her (rumored) surgery to the eyes. She responded in a very strong language.

“It didn’t matter; just one more story in the massive smut pile generated every day by the tabloid press and fueled by exploitative headlines and folks who practice cowardly cruelty from their anonymous internet pulpits.”

Not a smile with the finger pointed in that essay.
Source: Associated Newspapers (Ireland) Limited

The essay was titled ‘We Can Do Better’, published to criticize the media scrutiny, also stating, “Ubiquitous online and news source repetition of humiliating tabloid stories, mean-spirited judgments and false information is not harmless.”

Speaking of which, the “humiliation to set her perspective right” thing in her Vulture profile was not indicating the plastic surgery rumors. It was things that led her to stop acting for all those years. However, she did talk about those pesky “plastic-surgery kerfuffle” and the kind of panic it brought when she didn’t look herself in that Elle celebration.

Regardless of what the tabloids say, her Hollywood age hasn’t matured yet.
Source: Getty

“And the implication that I somehow needed to change what was going on because it wasn’t working. That makes me sad,” she stated. “I don’t look at beauty in that way. And I don’t think of myself in that way. I like my weird quirkiness, my off-kilter mix of things. It enables me to do what I do. I don’t want to be something else. I got hired in my blue jeans and cowboy boots with my messy hair. I started working like that. I didn’t have to change to work. So why was I suddenly trying to fit into some mold that didn’t belong to me?”

After all the criticisms, Zellweger did learn to embrace herself after all the therapy appointments during the break. Salma Hayek was also instrumental in helping her realize she needed to slow the pace of life a little. Now, she’s admittedly stronger than ever.

Keep in touch with Idol Persona for more updates.