Home / health / Is There Any Truth to Famke Janssen's Plastic Surgery Rumors? 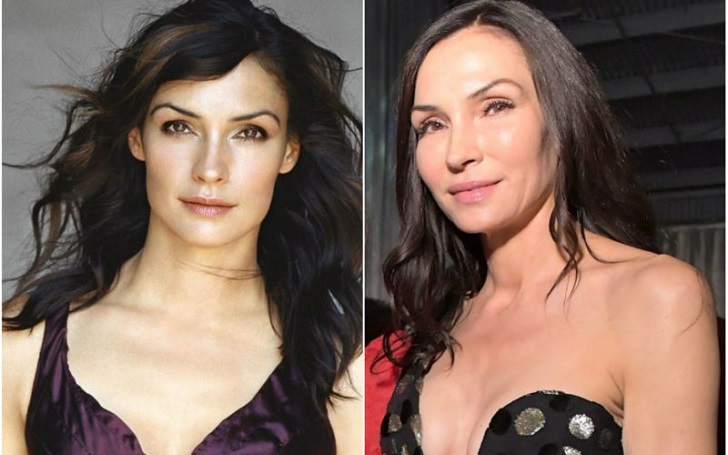 What has she done to her face? When Famke Janssen was making frequent event appearances in 2019, people can't help but question her alleged new looks, because quite frankly, they hated it. It's like they saw her as a real-life 'X-Men' member.

You've seen her in dozens of movies, and even TV series. And as you grew up to those, it's obvious you want the Bondgirl back again. But despite age being just a number, there's not much one can do when their face is aging too.

Whatever discussion there is about Janssen's plastic surgery case, she hasn't openly said anything about it. But when her wrinkle-free, plumped-up cheeks were seen in public, people were mocking her for not even smiling properly.

The Criticisms Started in February 2019, The Laughter Lines Were Apparently Gone

The luscious hair and the perfect bone structure made for a really elegant smile; it was awesomely apparent in those movies before. But when Janssen was photographed walking out and about in the street of London in late February 2018, people were losing their minds.

"Line-free, pillowy complexion," Daily Mail described her face at the time. Meanwhile, the Italian site, Giornale, called her "The Superhero of Botox".

In days after the appearance, she also attended several red carpet events with the same face, but she was stunning nonetheless for her adoring fans.

Recommended: How Often Is Joy Behar Involved in Plastic Surgery?

Daily Mail came back with another report in October 2018 regarding Janssen's wrinkle-free face. She appeared in the final episode of the BBC mini-series, 'The Capture', and viewers were surprised to find it hard to recognize her on the show. They shared their disbelief on Twitter.

Viewers were shocked at her transformation in 'The Capture'.
Photo Source: Nick Wall, BBC/Heyday Films

There were, of course, people who were gushing over her inclusion on the show, but the plastic surgery criticisms were overshadowing the praises. They were distraught at the change in her face from the natural beauty that they all adored her since her 'Golden Eye' Days.

"Is that Famke Jansen??? WTF has happened to her face, she looks well puffed and cannt move anything! No no no," one wrote. "Woah, Famke Janssen...more fillers than Subway," another one was stunned. "Why do such beautiful women do this to themselves?? Makes them look older than they actually are."

"Oh s**t Famke's face and brows don't move anymore...Girl, what did you do?" another one wrote as the shock actually sent shockwaves throughout Twitter.

It also spawned a discussion on Reddit about how she used to be pretty.

Learn Why: Kaitlin Olson Had to Undergo Some Cosmetic Surgery Changes

The Dutch actress had it all coming as no one could help but talk of her face in those months. Her eyes were more "catty" than usual, and she could barely smile or stretch her skin on her face. Everyone wanted that Bondgirl back again.

You'd have to go back to 2012 to find any statement from her about plastic surgery. She said she was refraining from going under the knife because she was terrified of "trips to the dermatologist or to the hospital".

Gravity will work against you. You can try to fight the process, but you're not going to win the battle. I'd rather focus on writing and directing than trips to the dermatologist or to the hospital, which frankly terrify me...

"There is something about plastic surgery that doesn't make people look younger. It just makes them look stranger," she said at the time.

She wanted people to make the aging process look naturally graceful and that she was busier than ever to have any work done. Sure, 'Nip/Truck', as well as the whole 'X-Men' and 'Taken' franchises, was pretty demanding, and she did those ever so gracefully. But if she's opted to have had her face done, it was a little too much for people to handle. Still, as fans, we could accept her choice of change, but some things are best left unchanged.