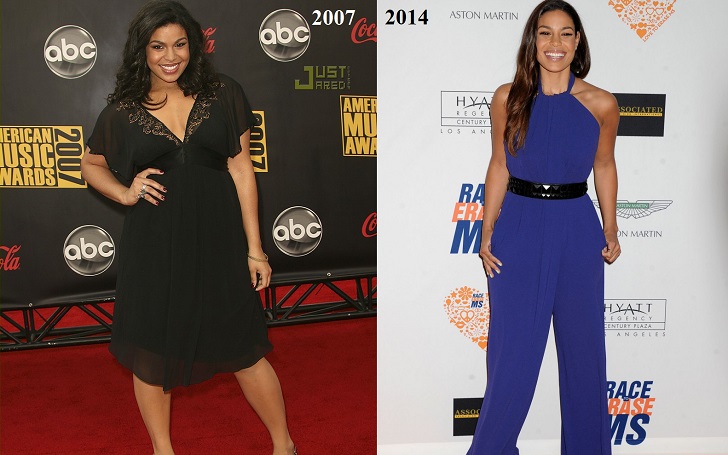 There's a lot about Jordin Sparks that needs talking. Besides being the youngest person ever to win the coveted 'American Idol' in 2007, her figure is something she's maintained without going back to how she used to be. Following a big realization for weight loss, there are few people who can maintain their shape as much as Sparks.

Sparks is a singer first, and after she's had her fill with music, she branched out into acting as well. She's now married to husband Dana Isaiah and has one son, Dana Isaiah Jr., with him.

In fact, her husband even would be inspiring her for six-packs.
Photo Source: Jordin Sparks Thomas, Instagram

Jordin Sparks went on a weight loss journey in 2010 after constantly feeling fatigued and needing a change in her lifestyle. Then, since early 2011, she first lost 30 pounds in a few months and continued the journey to lose a total of 50 pounds by mid-2012. Walking, hiking, gym, Zumba and a better look at the diet was all it took.

Jordin Sparks was size 14 when she won American Idol in 2007. Then in the fall of 2010, she went down with something on Broadway. That was the first time she re-evaluated her health at all. And after a string of illnesses that year, it was now or never for her.

"I got really sick in the fall of 2010 right after Broadway," Sparks told Today after her 50-pound weight loss. "And I was just like, I am not going to take my health for granted anymore. This changes right here, right now."

Now, there's a new confidence in her to return to Broadway.
Photo Credit: Emilio Madrid-Kuser, Broadway

"I had gotten really sick," she told Today another time in 2014. "And I was about to celebrate my birthday and I was like, ‘I should be in the prime of my life right now. I shouldn't be feeling like this. I really need to make my health a priority.’ And that's what I did."

The first step she took was to take a look at her diet and then take a step up to getting in shape, physically. "I was really evaluating what I was eating, when. And why I was eating it. I love food and so I was just eating because it tasted good. I kind of re-evaluated that. Now I definitely listen to my body first," she continued. "I just took baby steps because I was so fatigued from what I was sick with. Just doing baby steps and getting more into physical activity and then eventually I found a trainer. And I've just been trying to keep it up. It's a day by day thing. It’s been a year and a half and I feel good."

Recommended: Weight Loss Was a Gift for America Ferrera During Her Journey to Self-Acceptance

Don't get her wrong, she loved her look before, despite not walking around in bathings suits that often. But on her 21st birthday in December 2010, she came down with pneumonia, and she just couldn't take her health for granted anymore.

In the First Four Months, She Lost an Amazing 30 Pounds

The thought of going sleeveless really bothered the singer before going through weight loss. But come mid-2011, she had the utmost confidence to pose in a bikini for the first time and wear a backless gown without Spanx. She shared in July 2011 about how she felt amazing after losing 30 pounds in four months, getting up to a size-8 figure. According to Redbook though, she first lost 15 lbs in four months and then lost the other 15 lbs in the next six months.

As for how she did that, she credited eating smaller portions and taking Zumba. "Before, if I were to wear a bikini, it would just be in front of my mom or really close friends with a coverup," the 'One Step at a Time' singer told People at the time. "I feel good! I love that I still have my curves. I definitely didn't want to lose those. I don't want to lose more weight. I just want to tone. I'm in a really good place now."

How That Went Down

When actually starting the weight loss journey, she regularly went on hikes and did 30 minutes of high-impact cardio. Eventually, she got hooked on taking hour-long Zumba classes up to five times a week at 'Gold's Gym'. Nichet Smith was her instructor.

She also told Redbook that she first started walking with her cousin. And a friend introduced her to Smith (name not mentioned). As for the Zumba, she started with the style 'Sensazao' for two to three times a week as she burnt 600 calories an hour doing what she loved.

Changing diet was the second thing she considered, especially cutting down the sweet things her mother made and nana baked. She limited herself to one helping of the sweet potato casserole instead of two and stopped eating from two hours before going to bed.

Jordin might've been satisfied with the 30-pound weight loss, but she wasn't going to give up on her routines. She still had to maintain her figure. And that's what she did. The rest 20 pounds of the 50-pound weight loss was just toning up her already perfect size. She revealed her weight to be between 155 and 161 to Today in May.

Dancing was a great introduction to her journey.
Photo Source: Shape

The singer became a model of sorts as she graced the covers of Redbook and Shape Magazine, in a sizzling new silhouette for the latter one. But not everyone supported her decision. Of course, they could've been ignorant of the fact that she made the decision because she was sick or just didn't know. But they felt like they had lost a plus-sized role model in the process.

Protein and high-fiber fruits became a big part of life since starting her journey.

Losing weight wasn't everything. If you don't continue maintaining your body, it's as good as shortening your lifespan further still. As for Jordin Sparks, things haven't been difficult to maintain her body, even through her pregnancy and the birth of her son.

Answer: Did Angela Amezcua Lose Weight As a Revenge on Clay Harbor?

When it comes down to the resolution for her post-weight-loss life, eating moderately is key. Moderately meaning eating small portions of food throughout the day instead of three big meals altogether.

She was rocking that figure through the last decade.
Photo Credit: Frazer Harrison, Getty Images

"To me, health is wealth!" Jordin said as she explained her daily diet to People in 2017. "We can enrich our lives in so many ways when we are fueled by the proper nutrition and feeling good from the inside out." To avoid getting hungry, she ate two lunches a day in moderation. To stay hydrated, of course, a gallon a day would do.

The calorie-count tops 1,780 calories, well within the recommended limit. And with such a happy private life, there's not much to get her down.