Was Angela Amezcua's Weight Loss a Revenge on the Clay Harbor Breakup? 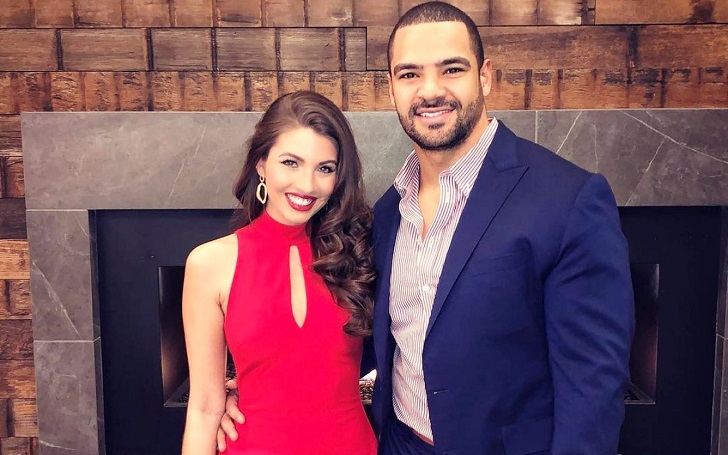 Remember that jaw-dropped look some guys have when they see their ex after some time all trimmed and looking amazing? Yeah, that happened with Clay Harbor when Angela Amezcua walked in the gorgeous mauve gown at Chris Randone and Krystal Neilson's wedding. Her weight loss figure wasn't the biggest attention though; it was the reactions.

'Bachelor in Paradise' veteran Randone was the one who introduced Harbor and Amezcua in 2018 after both of them had tried their hand at love with their franchise. Harbor was in Becca Kufrin's season (14) of 'The Bachelorette', and Amezcua was in Nick Viall's season (21) of 'The Bachelor'. Angela also went on with 'Bachelor in Paradise' afterward but ended up a relationship in a sour note.

But after all the searching, it was almost believable that Clay and Angela would work out. After all, she was ready to move anywhere his NFL career took him, and her plans kind of matched to where he was seemingly heading to. But after seven months in March, they were moving on, which they confirmed in April. While no one knows the real reason of the split, many think it had something to do with Clay appearing in the 2019 season (6) of 'Bachelor in Paradise'.

So the 'Bachelor in Paradise' Season 6 had aired, but you know the filming took place a little earlier right? So yeah, the wedding between Chris and Krystal that took place on June 16, 2019, aired on TV that season in August. And the biggest thing to take away had to be Krystal's appearance at her wedding and Clay's look when he looked at her.

Angela came with a new kind of confidence at the wedding.
Photo Credit: John Fleenor, ABC

It was understandable Clay was not feeling too good about seeing his ex at the wedding, because she was one of Krystal's bridesmaids. And the confident Angela a few weeks after the breakup shocked pretty much everyone, including Clay obviously.

Recommended: Here's How Jen Atkin Won the Miss Great Britain 2020 After Being Dumped for Being Overweight

While Clay's face was meme-worthy, the fans labeling her new figure a 'revenge body' was something an even more talked about topic on social media. 'Bachelor in Paradise' veterans Haley Ferguson and Ashley Iaconetti also marveled in her new look after having lost "so much weight" since the breakup. But one fan, in particular, was a little unhappy with the "discussion". The tweet's deleted now.

Aside from the fans, Angela herself took to Twitter to explain her shock at how the "discussion" on her weight loss was going on over on Twitter or any other social media platforms for that matter.

"So I haven't watched tonight’s episode yet but what I’m seeing," she wrote on Twitter. "Y’all, I lost like 5 pounds and just toned up a little... Dang, I didn’t think it was that big of a difference 😳🤔."

She uploaded a 'Workout with Me' video in October 2019.
Photo Source: Angela Amezcua, Instagram

Yeah, she wasn't thinking that much about her appearance either. She just wanted to celebrate her friends' wedding. But there was more than just that discussion going on from her appearance in the episode. Like maybe if she took her "revenge body" to the wedding to make her ex feel bad or something.

Clay Found It Tough Meeting Her, And Ashley Had No Problem Talking about the Split

Of course, it was not easy meeting his ex when he was looking for a new romance on the show, especially after having already found Nicole Lopez-Alvar. He admitted that it was "tough" seeing Angela and again stated he never meant to hurt her. He explained how he was thrown off from being rejected in the NFL and told her, told Angela, "I still care a lot about you."

They were in a nice place when they were together.
Photo Source: Angela Amezcua, Instagram

Entertainment Weekly also reported that he rested his hand on Angela's leg, so it's understandable why Nicole would have a thing against Angela after that.

Check Out: 'Love Island' Star Lucie Donlan Lost Weight Before and After the Show

And during the talk, she did not retract from talking about the bitterness over their breakup and his decision to go on the dating game on 'Bachelor in Paradise' immediately after their split.

The showdown at the event was a little too much for Clay's love interest on the show. She was understandably upset over her coming back into his life, but she might've taken it a little too far.

Nicole was a little pumped up after seeing Angela during the wedding.
Photo Credit: John Fleenor, Getty Images

In a scene with Tayshia Adams, the 26-year-old joked about how Angela had been practicing her bold bridesmaid’s walk for those weeks to impress Clay. Clearly, she was threatened by Angela's presence in front of her. She was mocking her as she called her "desperate" and "crazy" while even body-shaming her physique.

Also: Did Kierra Sheard Have a Weight Loss Surgery or a Cosmetic Surgery

"She’s weak. Literally, she’s like one pound. She has no body mass. She needs some Cuban meat on her bones," Nicole spoke up. And 'Bachelor in Paradise' fans couldn't swallow it all.

But it was just a heat of the moment for her. She later posted a series of tweets showing her regret over having said things about Angela. She said she was deeply hurt and thought she was about to lose the man of her dreams.

In another tweet, she explained how her comments were not intended for the camera and went on to praise Angela as well. Clay also jumped in to defend her for doing her best "to make me laugh and feel better about the situation."

So yeah, that didn't go out too well. And we'll never know if Angela's weight loss was partly for the reasons some thought of, but Clay's relationship with Nicole ended up after the show. And Angela was also pursuing a relationship with Chase McNary, but that was also reported to have ended.