Nicolas Cage, 57, Back To Work in LA After "Drunken Brawl"

Nicolas Cage, 57, Back To Work in LA After "Drunken Brawl"!!

As Per Daily Mail, Nicolas Cage has been photographed going back to the set of his new film in Los Angeles, just a day after it was revealed that the actor was involved in a drunken brawl in Las Vegas.

On Thursday, Cage, 57, was seen giving co-star Demi Moore, 58, a tight embrace while filming scenes for their upcoming project, action-comedy The Unbearable Weight Of Massive Talent.

The alleged Las Vegas brawl is said to have occurred on September 13.

Cage plays a fictionalized version of himself in the film, where he reluctantly accepts a $1 million offer to attend the birthday of a Mexican billionaire super fan.

When things take a wild turn, 'Nic is forced to become a version of some of his most iconic and beloved characters in order to extricate his wife and daughter from the fan who is notorious drug lord,' according to a synopsis.

Click Here To See: Kylie Jenner Fans Think She Dropped Another Clue: She's Having A Boy

When he was playing himself, it appeared that Cage, who has previously displayed thinning hair, had a much fuller head of hair. At one point, Cage was seen getting into a fistfight with a male co-star while filming scenes for a brawl.

The sighting comes after it was reported that Cage was thrown out of a Las Vegas restaurant last week after a drunken brawl with staff.  According to a video obtained by The Sun, the actor is escorted out of Lawry's Prime Rib near the main strip.

According to the publication, onlookers mistook him for a homeless man during the September 13 incident. They told The Sun that Nicolas had been drinking expensive whiskey and shots of tequila before becoming irate.

The actor, dressed in leopard print pants and flip-flops, can be seen sitting on a sofa barefoot and struggling to get his scandals on before staggering around and shouting.

In the incident, on September 13, he was stopped from returning to the eatery by a woman believed to be a female staff.

It comes after an emotional year for Nicolas, in which he married for the fifth time and lost his mother, Joy Vogelsang. 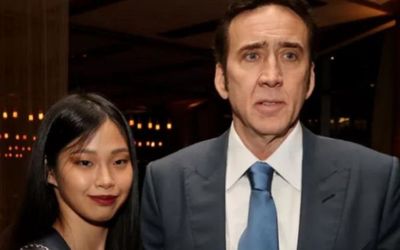