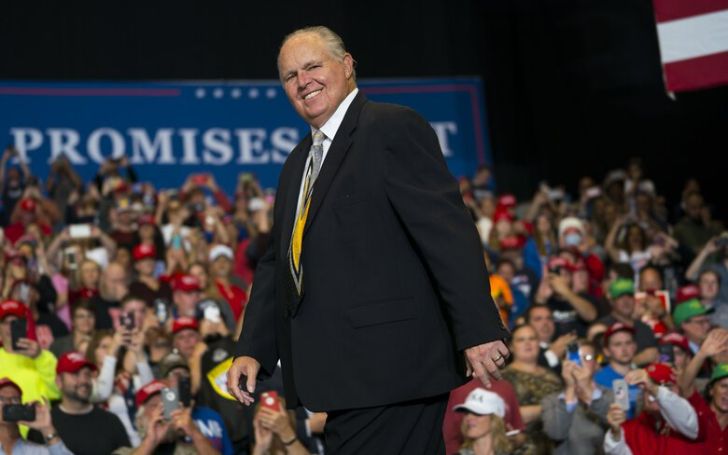 Born on January 12, 1951, in Cape Girardeau, Missouri, Rush Limbaugh was raised by his parents, Rush Hudson Limbaugh Jr. and Mildred Carolyn Limbaugh. He grew up alongside his younger brother David Limbaugh.

Rush Limbaugh marked his name in the broadcasting industry. He is an American radio personality, conservative political commentator, author, and former television show host. Actually, to be more precise, he hosts the popular conservative American talk radio show The Rush Limbaugh Show. Indeed, a show named after him. The show premiered back in 1988 and went on to become one of the highest-rated talk radio shows.

With all of the fame that came to Rush's life from his successful career, he did become part of several controversies. One of them being his unnatural weight loss. We will talk about it on today's article; thus, keep reading to learn it all.

Back in July 2009, when Rush Limbaugh was hosting his show 'The Rush Limbaugh Show,' his guest James Golden, also known as Bo Snerdley, questioned how much weight he lost?

Although Rush, as a host, doesn't want to make the show about him, he gently explained he dropped 90 pounds of unhealthy fat from his body. Now, for a person to lose one's weight isn't a big deal if he/she put some effort.

However, shockingly, Rush was hardily trying something challenging to cut off his body fats. Yes, you read it right. Nothing hard at all; all he did was changed his diet. Further, his story blew of many people when they learn; it wasn't even six months that he put his new diet on his system, and he already shed 90 pounds.

We know now that the political commentator Rush Limbaugh chose to go with a diet plan which totally changed his life. Surprisingly, he lost 90 lbs. under six months back in the year 2009.

As Rush's weight loss result was mind-blowing many of you might be wonder who created his diet. Well, as per Rush himself, all credits go to Quick Weight Loss Centers (QWL), a Florida-based company. According to ABC News, QWL provides supplements that include protein boosters, carbohydrate blockers, and appetite suppressants to its customers for rapid weight loss.

Before Rush implemented his diet plan made by QWL, he was into exercise. Indeed, he worked out for some time; however, unfortunately, it never showed any results because of the failure; he reached out to QWL, who prepared a perfect diet to burn his fat.

Though the QWL diet for Rush turned out to be the exact thing he wanted for better results, many began to speculate whether it's healthy or not for the long run. While discussion on that topic was going in, many bashed his diet to be dangerous for health.

One of the people on the crowd to criticize Rush's unhealthy diet was Tim Scallon. He was then- Dietician at Memorial Health System of East Texas. As per his words, diets that promote rapid weight loss isn't good for one's health. Why? Because people gradually gain weight, and the weight loss process should also be the same. It should take some time for people to shed their body fat for it to be healthy. Sudden dropping in one's weight is unnatural.

We all know there are always two parts of a story and sometimes more than two. The same goes for Rush's diet and rapid weight loss. No one knows if it is good or bad for people to follow the same thing he did. However, if you ask us, we like to add something up.

According to NPR, Rush, 69, is diagnosed with cancer. We aren't saying that it's his diet plan that causes this infection, but he is in a critical state, and as per the news, he has lung cancer, and it is terminal.