The Walking Dead producer knew he was breaking people's hearts.

'The Walking Dead' had its fair share of ups and downs in previous years, but the demise of Glenn (Steven Yeun) was widely regarded to be one of the lowest points.

The beloved character was brutally murdered by Negan (Jeffrey Dean Morgan) alongside Abraham (Michael Cudlitz) in the season seven premiere, and several viewers found it needless and blatantly brutal.

Greg Nicotero, who directed the episode 'The Day Will Come When You Won't Be' has now revealed he was pretty uncomfortable with the plot, because he felt he was "breaking people's hearts."

The director continued, "Like, the guy just says, 'Eenie, meenie, minie, moe,' and then he was gone."

Greg admiited he was really bothered since he was pretty close to the actors. He added:

"I went in and I directed the best episode that I could direct knowing that I was breaking people's hearts, and really sort of walking right on that line, but part of what the show really is about in this iteration of the show, it really is about that senseless one minute they're there, the next minute they can be gone."

Nicotero remembered he had read a lot of great things as well as numerous awful stuff about it. He admitted there are moments he identifies with some of the statements that were mentioned, because they had such discussions.

Check Out: The Walking Dead Cast Share Their Most Memorable Moments With Negan's Victim [HD]

Nicotero explained, "There were things that came up, we had a conversation, I said, 'Mark my words, someone's gonna publish an article about that,' and then the episode airs, and there's an article and it's right there. And it's a little frustrating sometimes." 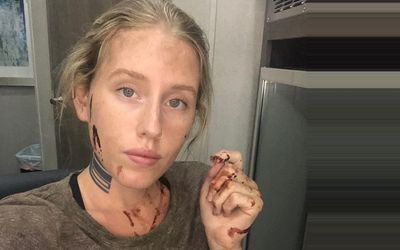 Why Was Lindsley Register's Character 'Savior Laura' Killed Off from 'The Walking Dead'?