Home / tv-series / Why Was Lindsley Register's Character 'Savior Laura' Killed Off from 'The Walking Dead'?

Why Was Lindsley Register's Character 'Savior Laura' Killed Off from 'The Walking Dead'? 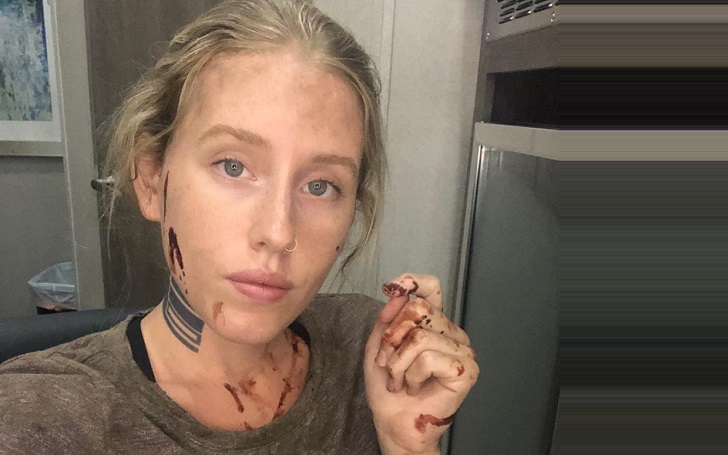 Lindsley Register was around the acting industry for quite some time. But it took a little time and quite a while for her to get recognized among the people. That is, until she got the biggest role she could've asked for.

When Register was cast as 'Laura' in the critically-acclaimed 'The Walking Dead', fans of the show were not sure if she'd perform up to their expectations. Hardcore fans know how much connection they feel when a character stirs up the plot. And that she did. Now, she's everyone's favorite.

'Laura's time is over, and no one knew it would happen.
Source: Gene Page, AMC

However, as much as viewers would've liked her to stay for much longer, she's not coming back at all. In the 10th episode, 'Stalker', of the 10th season of 'The Walking Dead', 'Laura' met her end. Despite her loss, it was a demise of valor for the fans and actors alike.

Here's How It Went Down (If You Haven't Seen It Yet)

After the episode came to be, fans have been mourning the loss of 'Savior Laura'. The moment comes when 'Laura' catches 'Beta' as he is confronting 'Gamma' in a prison cell in Alexandria. She could've left 'Gamma' there to die, but her transformation throughout the show doesn't make her the one to bail out of helping someone, even if it's a defected Whisperer.

In the course of saving Gamma, Laura gave up her life.
Source: The Walking Dead, AMC

'Laura' thus decided to confront 'Beta'. It was enough to let 'Gamma' escape the clutches of 'Beta', but the same fate was not to be for 'Laura'. She put up one hell of a fight to hold him off. 'Gamma' later successfully hid with 'Judith'.

Register was introduced on the AMC series in a Season 7 episode, 'The Cell' (ironic how her ending played out in a cell). But she was made into a completely different character as she is now favored as.

'Laura' was fiercely loyal to 'Negan' as she was the one to report 'Dwight's betrayal to the leader of the 'Saviors'. As she went on to be featured more often, she rose to be on the council of Alexandria. She was then making the right choices for the good of the same group of people she used to wage war against.

Fans Are All Mourning the Loss of 'Laura' Following the Surprise

'Laura's demise came as a complete surprise to the viewers as Register had never talked about the end of the character in her interview or her social media handles. But once people started to bid farewell to her star character, she acknowledged their disappointment and shared their memories on Twitter. A lot of them were left confused.

It surely was a surprise.
Source: Lindsley Register, Instagram Stories

The 26-year-old was not portraying the star character on the show, but she was certainly a fan favorite. So you can imagine the disappointment her fans felt for her departure from the role of four years. Many didn't get the closure that they wanted and felt she deserved more on the show.

Of course, she saw those farewell posts on Twitter. Look at her Instagram Stories, and you'll see a flood of tributes she's shared from her fans. She reshared many of the tweets to let them know she's okay with her departure. In fact, she's looking forward to two more projects to be released sometime soon. One of them is called 'Scorn', a project with her apparent boyfriend.

Suggested: Jenna Ortega Debunks a Major Theory about 'Joe' and 'Ellie' in 'You' Season 3

Plus, the extremely private Lindsley turned emotional in a series of Instagram stories where she spoke about the immense support she got from her fans. "I just wanted to say a quick like thank you for all of the support and the well wishes and holy crap it's an emotional time," she spoke with teary eyes, which she would've denied if the video hadn't been WEIRDLY cut off.

She was trying so hard not to break down.
Source: Lindsley Register, Instagram Stories

But when she came back, she was still not able to control her eyes and got even more emotional as she thanked her fans for the immense support. She was about to cry, deny she might, but ended the appreciation post with another thank you.

At the beginning of the first clip, she also assured fans she'll be posting a video on YouTube, also showcasing her last days at 'The Walking Dead'.

And yeah, she might come back around on the show, that is if the writers and creators build up a return for the character via flashbacks and all. But as to why she was decided to be cut off from the show is a complete mystery. It just might be the case of actors trying to move on from being on a show for much longer than they feel comfortable with.

It seems to her private decision judging by her reactions, but she might've been killed off for completely scriptive reasons.

Stay tuned and connected to IdolPersona for more updates on your favorite celebrities. Stories will be amazing here.