Home / lifestyle / Who is Woody Harrelson's Wife in 2021? Details on His Married Life Here

Who is Woody Harrelson's Wife in 2021? Details on His Married Life Here

Learn All The Details Of Woody Harrelson's Wife and Married Life Here!!!

The fans of one of the most awaited movies, Venom: Let There Be Carnage, must be familiar with the name Woody Harrelson who will be seen in the character of Carnage. Professionally, he is an actor, theatre artist, television personality, and social activist.

The vegan actor has a net worth of $70 million in 2021. Harrelson has a thirty-five-year career in the acting field and charges around $7 million for his movie appearances.

The 59-years-old actor has three Oscars nominations and seven Emmy awards nominations. Harrelson is one of the most talented and versatile actors the industry has got. As his fans are excited to grab the details of him, we will be talking about Harrelson's wife and married life in this article.

Is Woody Harrelson Married? Who is His Wife?

Most of Woody Harrelson's followers might know that the actor is married in 2021. Indeed, he is; however, many might not know that the Zombieland actor tied the knot twice, so currently, he is with his second wife.

Harrelson is currently married to Laura Louie. The duo shared vows back in 2008 and are together since then. Before Laura, the actor was married to Nancy Simon, but the marriage didn't even last a year.

Woody Harrelson and his spouse Laura Louie are already together for more than a decade as a married couple. So, how and when did the love birds encounter.

According to Ranker, Harrelson first met his better half after he hired her as his assistant. Yes, you read it right; they first met as an employer and employee back in 1987. However, with time their relationship changed from professional to romantic.

The regular meeting turned their relationship into something special. After three years, the couple finally began dating in 1990. Following that, they walked down the aisle in 2008.

Anger Management cast Harrelson and his sweetheart Louie share three daughters. Their first daughter, Deni Montana, was born on February 28, 1993. Similarly, they welcomed their second child, Zoe Giordano, who is now 25, on September 22, 1996.

Also, See: Is Raheem Sterling Married? If Yes, Who is His Wife?

After giving birth to their second baby girl, Harrelson and Louie were subsequently blessed by their third child Makani Ravello in 2006. She is their youngest daughter and is now 15-year-old.

Besides being a former assistant, Laura is an environmentalist, and she has helped develop Eco-village, whose website helps create eco-friendly products and reduce environmental hazards. Along with her husband Harrelson, she is working an organic food delivery outfit serving the community to serve a vegetarian diet.

Before Laura, Woody Harrelson was married to his ex-wife Nancy Simon. Professionally, she is an American author and businesswoman.

Talking about their marriage, Harrelson and Simon tied the knot in 1985. Things looked good between the newlywed couple; however, something between them went off, and all of a sudden, they parted ways in 1986. Thus, the duo marriage didn't last even for a year; further, don't share any child.

Recommended: Who is Sierra Katow Boyfriend in 2021? Find It Our Here

According to the reports, what Harrelson and Simon had was not special, and their marriage was not that serious. The couple tried to end their marriage the next day after the next day of their wedding. However, the legal procedures took more than ten months. Thus, it took some time for the couple to walk their own paths. The duo legally separated on January 20, 1986. 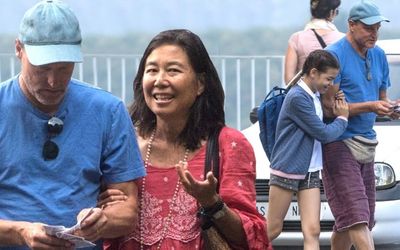 Everything To Know About Woody Harrelson's Kids in 2021