Home / lifestyle / Andrea Bocelli's Ex-Wife Enrica Cenzatti - How Well Do You Know Her? 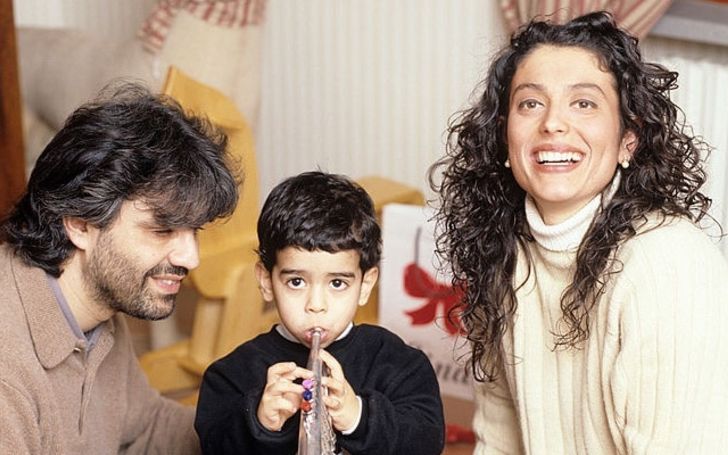 The 61 years old Italian opera singer, songwriter, and record producer Andrea Bocelli (net worth) needs no introduction at all. Named one of the People magazine's 50 Most Beautiful People in 1998, Celine Dion said if God had a singing voice, he must sound a lot like Andrea Bocelli. That high praise coming from Celine Dion is all the description needed to narrate Andrea Bocelli's singing career.

Losing his eyesight might've added difficulties to the singer's life, but that didn't stop the artist from giving out award-worthy albums and performances. In most of his personal life, Andrea is supported by his current wife, Veronica Berti. Andrea married Veronica in 2014, twelve years, and one daughter after their first meeting in 2002.

Before Veronica Berti, the singer was married to Enrica Cenzatti, who he shared two children with. The ex-couple separated in the same year Andrea met Veronica. But who is Enrica Cenzatti?

Do Not Miss: Andrea Bocelli Net Worth - The Complete Details

Enrica Cenzatti is the first and former wife of Andrea Bocelli. Enrica is often brought into the focus of attention as the famed singer's former wife, but the 51-year-old chooses to keep her personal life to herself. Not much information has been made public about the singer's ex-wife.

The story of how Enrica and Andrea are out there on the internet and a quite an interesting one too; the fact that Enrica was only 17 when she met her future husband Andrea, who at the time was 29 years old, also piques the interest of most people.

First Meetings At a Bar

Twenty-nine years old Andrea Bocelli was a law graduate who didn't have any interest in practicing law. Andrea's passion was in music from the very beginning, and thus that was what he wanted to follow. So during his early career, he was singing at piano bars to pay for piano lessons with Franco Corelli.

Recommended: Is Rome Flynn Still Dating Camia Marie? Who is His Wife?

Andrea's visual impairment never became a problem for the relationship, and so the pair were married on June 27, 1992.

Over the time of 10 years that Enrica Cenzatti stayed married to Andrea Bocelli, she mothered two of Andrea's kids.

Andrea Bocelli and his two sons Amos and Matteo from his previous marriage.
Source: Twitter

The ex duo's first son Amos Bocelli was born three years after their marriage on February 22, 1995. The oldest of two Amos followed in his father's footsteps and ventured into the music world very early in his life.

Also See: Matthew McConaughey is Married to Camila Alves Since 2012 - Check Out Their Intriguing Love Story

Two years later, Enrica bore Andrea's second son Matteo Bocelli on October 8, 1997. The 22 years old not only shares a close resemblance with his father's looks but also inherited Andrea's musical genes. He even contributed to his father's 2018 album 'Si.'

Unlike Andrea, Enrica never remarried after her split with her former husband in 2002. The mother of two still lives near her ex-husband and his new wife's place of residence and shares a close bond with them.

For more celebrity lifestyle, head on to Idol Persona.

Is Andrea Bocelli's Son Matteo Bocelli Married to a Wife? Find Out His Relationship Status