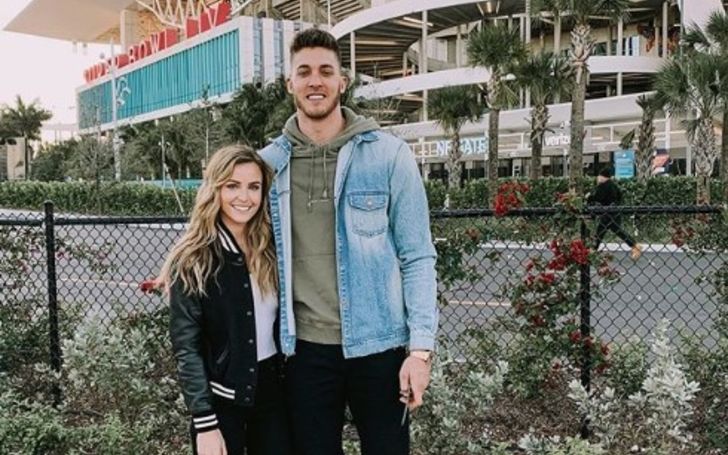 Who doesn’t know Elle Bielfeldt? You don’t, ok then Elle Leonard might ring a bell. Yeah, you catch it right, she is the beautiful wife of NBA star Meyers Leonard. The American basketball player Leonard aka The Hammer is one of the bests athletes who, despite his injuries, manage to climb the success peak in his career.

Lots of people grab tons of attention from their marital relationship with a famous personality. It is also the same for Elle; however, she builds her own image in the mass because of which she not only stands out as a WAG in the league.

The 28 years old Bielfeldt with her husband Leonard broke the internet with their viral video of playing H.O.R.S.E. There are more amazing things on her sleeves, which most people might not be aware of. As a result, we today brought you some facts related to Elle Bielfeldt. We hope you will enjoy it.

As we mentioned, Elle Bielfeldt is married to NBA athlete Meyers Leonard, and we think it is totally normal for her to be a fan of basketball, too, in which her beau created a successful career. However, did you know that her love for basketball began before she even met her soulmate, Leonard?

Yes, fellas, Elle has a great thing for basketball, and she even made it as a four-year starter at Peoria Notre Dame High School. Though she didn’t pursue a career in it, her athlete skills got admired by lots of people in a video where the lovebirds were playing H.O.R.S.E.

The Love Birds Had Their First Encounter in College

The love birds Elle Bielfeldt and Meyers Leonard first met in their college. She was one of the four children of her parents Davis and Julie Bielfeldt, and raised with a brother Max and two sisters Lydia and Matti, in her family.

The lovers Elle and Meyers began to date from their college days.
Photo Source: Instagram

Raised in a great environment, Elle went to the University of Illinois at Urbana-Champaign, where her family has a long-running association and even donated millions for the athletics program of the university. Like her grandparents, parents and several relatives attended the university, she also completed her education at the same university.

Also See: Is Rome Flynn Still Dating Camia Marie? Who is His Wife?

The pair met while Bielfeldt was a freshman in college. According to Meyers, they first got a chance to know each other with the help of his senior basketball player Mike Davis. One of Elle's friends was dating the senior player Davis because of which they frequently see each other and studied together a couple of times before they began to date.

Meyers Proposed Elle in May 2014

After dating for some years Elle Bielfeldt and Meyers Leonard created a strong connection that never faded. It wasn’t all sunny in their relationship because Leonard moved to Portland during his rookie year, and the lovers lived apart from each other.

Even though they couldn’t stay side by side, Ellen and Meyers trusted one another and maintained their long-distance relationship. Further, the Trail Blazers player Leonard step forward to upgrade their relationship. NBA star Meyers proposed to Ellen in May 2014 in front of her family members during a massive graduation party thrown by the Bielfeldt family.

Recommended: Does Swoosie Kurtz Have a Husband? Or Was She Ever Even Married?

Subsequently, longtime boyfriend and girlfriend, Bielfeldt and Leonard became husband and wife after exchanging marital vows in Oregon on August 2, 2015. Since then, the couple is enjoying their married life together, supporting each other in every path.

Elle is a Businesswoman and Has a Fitness and Nutrition Brand

In 2014 the beautiful wife of athlete Leonard, Ellen Bielfeldt, graduated with a bachelor's degree in advertising. She managed to pass out with a 3.73 GPA while working as the vice-president of her sorority and participating in the American Advertising Federation, according to Earn The Necklace.

We can see, Elle developed excellent marketing skills in her college years, which she now uses in her professional life. She is the business manager of Meyers Leonard Brand, as she controls various activities to make her husband's brand successful.

Except for the Leonard brand, Bielfeldt's hands are quite full to manage her nutrition bars company, Level Food, which was founded in 2018. Many NBA fans might remember Meyers used to face lots of problems related to health issues, which affected his gameplay.

However, things changed when Elle involved herself in making her hubby healthy. As the cause behind Leonard, bad health was due to his bad diet, Bielfeldt garnered information on nutrition and began to prepare a proper diet for her soul mate. Then one thing led to another, and now she owns a nutrition bar company.

HOW TO MAKE A TURMERIC TAHINI BOWL- ELLE LEONARD

Further, Leonard's life partner, Bielfeldt, also shares different tips as a nutritionist to achieve healthy living through her eponymous blog and guide her readers for a better life.

Elle Bielfeldt And Her Hubby, Meyers Leonard, About To Expand Their Family

What's new in Elle Bielfeldt's life as of 2022? Well, she and her husband, Meyers Leonard, are ready to expand their family.

Leonard, who holds a massive net worth of $50 million, shared the news of his unborn baby through his Twitter post. As per Leonard's tweet, he and his wife are blessed by God and will welcome their baby in the coming summer.

The NBA star posted that tweet on December 1, 2021. This means he and his better half will soon give birth to a new life.