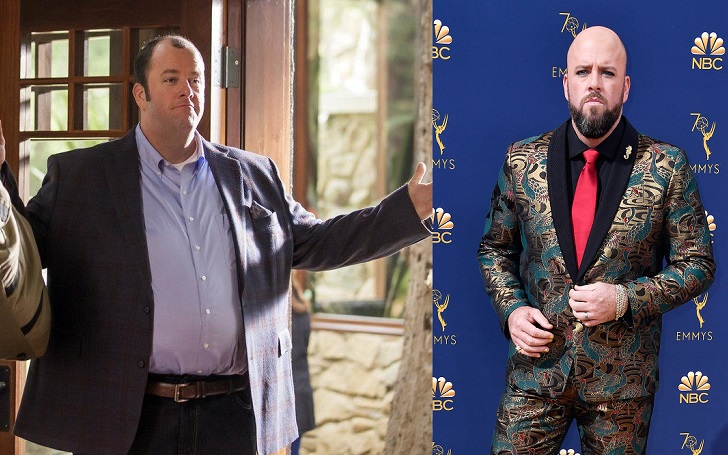 Some people just don't get satisfied with a good performance, huh? They need more. In the case of 'This Is Us', they wanted someone actually big in real life of the character of 'Toby Damon' instead of Chris Sullivan, who actually wore a fat suit to be bulkier than normal, for the first three seasons.

When viewers occasionally saw Sullivan, who enjoys a net worth of $5 million, in other projects like 'Stranger Things', things seemed like he'd actually lost quite a lot of weight for his other roles. But in 2017, when it was revealed that he wears a fat suit on the set of 'This Is Us', many were not happy, but many were thrilled as well. But he shed that weight in Season 4 by just talking off the fat suit.

Sullivan's body shocked the viewers immediately in Season 4.
Photo Source: This Is Us, NBC

Yeah, Chris Sullivan's weight loss you saw on 'This Is Us' is for his character 'Toby's story, for which he wore a fat suit in earlier seasons and just removed it for Season 4. But fans of the show were divided for it, suggesting it was not appropriate for the show to use someone with not much of a weight issue. It's their feelings, but you can't deny he entertained you for three seasons. Don't bail on it now.

A branch of 'This Is Us' outlines the weight loss story of the character partners, 'Toby Damon' and 'Kate Pearson', played by Chrissy Metz, as they share the journey together. The issue around Metz being allegedly forced to lose weight for the storyline was cleared up by she herself assuring that the story just motivated her for her real-life weight loss journey. But Sullivan's issue too spread like wildfire, and there's still a way people find to created backlashes.

'Toby' and 'Kate' had a on & off relationship on the show.
Photo Credit: Instagram

When Sullivan was out and about during red carpet events while the first season was still undergoing, one would've thought he's doing a really tough juggling work outside to toggle between his lookout in the real world and for his TV role. But in January 2017, his co-star, Susan Kelechi Watson (who plays 'Beth') revealed to Us Weekly at a press event that he actually wears a fat suit on set.

Revealed: David Letterman's Is Not Really of Weight Loss

That only meant weight loss would come to be extremely possible for his character, 'Tony' in the future. And that's exactly what happened in Season 4. When he took his shirt of in the early episodes, much like Metz's character 'Kate' exclaimed, it was shocking, to say the least. Some fans (who didn't know he wore a fat suit), were amazed until they learned of the real story.

Minds were blown when people first discovered it. One Facebook user. in particular, first started the bandwagon. "Oh my goodness, Toby, from 'This is Us' wears a "fat suit" and prosthetic jowls, the user wrote. "Mind officially blown. That's the real Toby pictured below! What the what?! #thisisus Who else loves this show?!"

Of course, the issue created an immediate backlash in January 2017 as they thought a real plus-size individual should've been chosen for the role instead of relying on a fat suit with Sullivan. Refinery29 made it into a controversy.

Many were angry for not doing justice to plus-size actors and that it's just "disrespectful to the story This Is Us is trying to tell about one's struggle with weight."

Recommended: Sherri Shepherd Has a Story to Tell for He Weight Loss

Sullivan was a little critical of the fans' critics as he did complete justice to the character he's putting his other experiences into, & it was also necessary for the plot.

"I think one, that the show is just too good, they had to find something wrong with it," he said when asked of the thing on 'Watch What Happens Live With Andy Cohen' in October 2017. "Two, I can understand why people feel fooled by things they see on TV," he continued. "Three, I feel like we're currently living in a culture where outrage is a bit of a hobby for some people, and if they're not outraged about something, they're totally bored."

He's relating to his character in a completely different way than just weight loss.
Photo Source: Our Teen Trends

He also told People that he loves the work he's done. "You know, there are different requirements for an actor for different roles. As you'll find in 'Guardians of the Galaxy 2', I'm not actually a space alien. As you'll find for 'Milo Ventimiglia', he's not actually a father. And I think that if people actually had a problem with the way that I was representing this character, or had a problem with the integrity of the character, or the way I was treating this character, then I would really like to have a conversation."

Later, he told HuffPost, "I guess, we all have different responses to things that we believe are true, when we find out they're not. The logistics of wearing a costume like that allows me to travel back and forth through time. We know Toby was married before and, because of the divorce, gained a bunch of weight. So there was a time when he was skinnier. So the costume allows, if they want to, for us to jump back and forth through time. There’s other logistical things involved in the decision-making … There's like a thousand things that go into each of these choices."

He also added, "And hopefully, I was just the best actor for the job."

Does Chrissy Metz Have a Problem with Sullivan Wearing a Fat Suit?

In real life, Metz and Sullivan have a great relationship. (Sullivan is married to his wife Rachel Reichard now.) So it makes sense that she'd feel totally okay with the decision to portray Sullivan with a fat suit. Even with a professional train of thought, she believes he's done a great job with the representation. And she also revealed on 'Watch What Happens with Andy Cohen' in February 2017 that he had been "heavier" before and thus "understands the plight of being overweight."

"We tested a lot of gentlemen who were bigger, and I get it — like people think the authenticity is kind of ruined by that — but Chris has been heavier and I think he does understands the plight of being overweight," she replied to a certain critic. "[But] also he was just the best man for the job. And people wear prosthetics all the time — This just happens to be weight as opposed to a nose or the chin ... It's just kind of the name of the game."

With the weight loss for 'Toby' revealed in Season 4, the showrunners don't want to obsess over that particular journey as the story will be impressive whether you talk about it or not. And it's best just to move on from it.

Stay tuned and connected to IdolPersona for some real celebrity Weight Loss Stories.