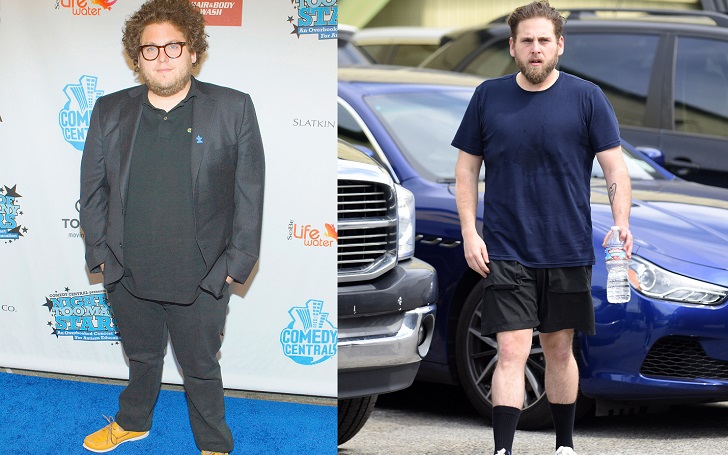 Jonah Hill was the type of person who used to be written into scripts before casting exactly him for a movie. It was primarily because of his weight. He was already an accomplished young actor, no doubt, but his appearance was used as a basis ahead of his fun nature for a role. Remember the 'Megamind' character 'Tighten's physique?

Well, no more. After feeling ridiculed for his weight all his life, he embarked on such a healthy lifestyle that he went on to become a Pitt too. He arrived unrecognizable at the premiere of the 2011 movie 'Moneyball'. It was rumored back then that it was with the help of 'Moneyball' co-star Brad Pitt, but he only credits his diet.

He was already getting in shape during 'Moneyball'.
Photo Source: Instagram

So to surmise, Jonah Hill credits his 40-lbs weight loss mostly to the Japanese diet in 2011. But he gained weight intentionally for his role in 2016's 'War Dogs', before getting back to his diet and workout regimen (mostly boxing), this time, with the help of his good friend Channing Tatum. Now, he's the best he's ever been. The roles might be a little different these days, though.

Feeling He Need to Be a Responsible Adult, As Jonah Hill Realized Some Things Following the Weight Loss

Jonah Hill had gained and lost weight plenty of times in his career. But the biggest change happened when he was filming for 'Moneyball' in 2011. From the time he was in 'Superbad' in 2007, it seems he'd lost about 40 pounds.

When asked why he decided to go on this journey, he told 'Kidd Kraddick in the Morning' that he felt he needed "to be a responsible adult" and lead a healthier lifestyle. With the new body, he was realizing the harsh comments about his look in the past actually deeply hurt him.

May 2022, he is looking pretty suave.
Photo Credit: Instagram

After his second weight loss success, following 'War Dogs', he shared with Ellen DeGeneres in 2018 about how the realizations came while he was filming his directorial debut, 'Mid90s', for the last four years.

"I think everybody has a version of themselves ― I call it a snapshot ― at some point in life... [you're] trying to hide from the world. Even if you get success or grow up or become good-looking or whatever... You kind of carry some part of that with you," he told DeGeneres on reflecting on his early day of fame. "For me, it's definitely being like this 14-year-old kid, being overweight, wanting to fit in with these skaters and hip-hop kids, and just feeling lonely and maybe not understanding my own worth."

Recommended: Former Adult Star, Jenna Jameson, Is Getting Back to Her Keto Diet to Replicate Her 80-Pound Weight Loss Journey

He'd put out a magazine at the time for people to read, free of cost and also wrote about the bad comments people had about his weight. "I spent most of my young adult life listening to people say I was fat, gross, and unattractive," he read his lines from the free self-love magazine, 'Inner Children'. "And it's only in the last four years writing and directing my movie, 'Mid90s', that I've started to understand how much that hurt and got into my head."

He is extremely focused on that 'snapshot' thing as he'd also mentioned it during his interview with 'Kidd Kraddick in the Morning' as well. "When I met all of you, metaphorically, was like for 'Superbad', right," he shared in 2011 "I was like... a 22-year-old kid, so when I listen to interviews or anything from that time, you cringe because most people don't have a snapshot from their most immature, idiotic time in their life... all my friends were in college so I was living like a frat guy like everyone drinking beer and eating pizza."

He Also Mentioned How He Works Out Every Day, & Brad Pitt Didn't Assist Him, His Japanese Diet Did

When Hill first started out with his new lifestyle, running became a great way to ease into exercise. You might remember how he struggled to run in 'Superbad', but in real life, he wasn't planning on giving up. And then, pushups started being regular.

"I went to nutritionists and then I started, uh, physically running instead of emotionally," he said in the aforementioned radio show. In terms of pushups, he started with 10 a day as he'd already lost some weight with workouts and then continued on to do 100 pushups a day. He was still doing it at the time.

In a Rolling Stone interview in 2013, when asked what he did every morning as part of his weight loss workout regimen, he wasn't too thrilled to talk about it (because he probably was gaining weight for 'War Dogs'). He did say he rides the elliptical every day, but not exactly for how long. "My workout routine is of little relevance," he just stiffened and said.

In terms of his diet, he found out on the way that Japanese food really helped him. He told ABC News (via Mirror) of his earlier weight loss, "It was just mostly diet. I wish there was some crazy thing that I did, like a pill or a genie or something, but I went to see a nutritionist, and he told me what to eat to change my habits and stuff. I found that Japanese food was very helpful to me."

According to his Bon Appétit interview, he's a sushi aficionado, his undeclared favorite one being his trips to 'Sushi of Gari'.

Gaining Weight for 'War Dogs', But Channing Tatum Comes to the Rescue, or... Something..

Hill (net worth) was already working with Leonardo DiCaprio ['Wolf of Wall Street' with minimum wage] and Seth Rogen. And when there's a new opportunity around, he wasn't giving up either. Then came this chance to work with Bradley Cooper and Miles Teller. So yeah, for the role of 'Efraim Diveroli', he said he packed on some pounds.

After the film concluded and was released in the summer of 2016, he was keen on getting back to some form of weight loss journey. He went to talk to his '21 Jump Street' pal, Channing Tatum, for advice.

You can always count on Channing Tatum.
Photo Source: Instagram

"I gained weight for this movie 'War Dogs', and then I wanted to get in better shape," he told Jimmy Fallon during an appearance on 'The Tonight Show' in August 2016. And so, I called Channing Tatum, and I was like, 'Hey, if I, you know like, eat less and go to a trainer, will I get in better shape?' And he's like, 'Yeah, you dumb motherf****r, of course, you will, it’s the simplest thing in the entire world.' "

However, that thing led to him deciding to hide away from Drake forever. He made a note of his meals, naturally typed 'dr' for 'doctor' into the recipient line and sent it often. But autofill unexpectedly wrote 'Drake' and sent him the picture. He never responded though.

Another thing the nutritionist suggested that he wasn't that great with was to drink less. "I went to a nutritionist and I said, 'I'll lose weight, I'll eat healthier and whatever, but figure out how I can drink beer'," Hill said in 'The Kyle and Jackie O Show' in June 2017, via Digital Spy. "It's so annoying because when I don't drink beer, I get really, really thin. Then when I drink beer, I get a little bigger.

In terms of workouts, his choice of routine was a boxing regimen. He was photographed at a gym in Manhattan in 2017, spotted jabbing, shadow boxing, and working with a trainer. Men's Health triangulates the gym as 'Gotham Gym' in NYC's West Village as per the sweatshirt the trainer with him was wearing.

It's unclear how much he's lost (The Sun assumes over 3 stone), but seeing him a decade apart, there's a clear difference in his body and self-confidence. And he was not going to lose movie roles because he lost weight. He is confident he'll be able to play a more diverse role because only a thin guy could play thin-guy roles, anyone can play overweight roles by using costumes.

There are no records available about Jonah Hill's weight loss in 2022 to reveal the actual figure. So, what is his weight? It is hard to answer. However, if we scroll through his Instagram posts, we can see he is leading quite a healthy lifestyle.

In Hill's recent clicks, he looks slim, which places us in a safe place to say that he is still working out and follows his diet plan. Speaking of his fortune, he holds a massive net worth of $55 million, as noted by Wealthy Persons.

Hill's recent work was in the Netflix movie, Don't Look Up. He showed up alongside Leonardo DiCaprio, Jennifer Lawrence, and other talented actors.

As of 2022, Hill is dating his girlfriend, Sarah Brady. His sweetheart loves to surf and is on her way to becoming a lawyer.