Home / health / Jenna Jameson Weight Loss — Will She Be Able to Replicate Her Last 80-Lb Success?

Jenna Jameson Weight Loss — Will She Be Able to Replicate Her Last 80-Lb Success? 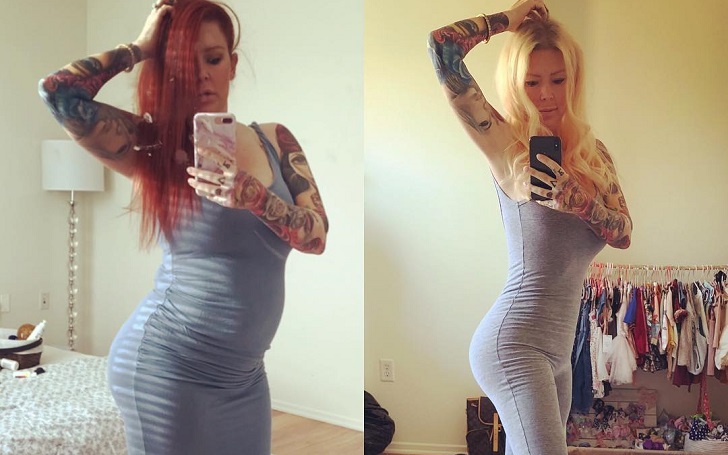 Jenna Jameson is basically a spokesperson for the Keto diet, unofficially. Her impressive 80-pound+ weight loss was completely due to a Keto diet and intermittent fasting after completely giving up on losing the baby weight for almost a year.

2018 was all about weight loss, but come 2019, she felt getting down to 107 lbs was enough for her and decided to put off the Keto diet. And fast forward to January 2020, she gained back about 46 lbs. She's been documenting her journey on Instagram, so you know the numbers are true. On November 5, 2018, she was 107 pounds, and on January 3, 2020, she weighed 153 pounds, both numbers were shared by herself on Instagram.

There are reports that she's finding it hard to lose weight on Keto again, but she went down by 10 pounds a month later, so that's progress.

The former adult star gave birth to daughter Batel Lu in April 2017 and found out she gained quite a lot as part of her post-baby weight. For almost a year, she almost gave up on the idea that she could lose the post-baby gain. But in March 2018, her mindset changed and found a diet that worked for her.

She first posted a photo of herself in lingerie holding her baby in February 2018, stating how she was reluctant to post the photo due to her insecurity with her belly. She did not announce she was starting a Keto diet, per se, but after a few months, when she shared her 57-pound weight loss success, she raved about how the diet has helped her immensely.

Recommended: Simon Cowell Completely Turned Around in Personality and Weight

Jameson later stated that she'd set a goal of reaching 125 pounds when she did get to that mark on September 10, 2018. The fun part of it was that she was ready to add calories to her diet, but a voice in her head was pushing her to reach 110 lbs. And no, it was not a healthy mind that was telling her that; it was her self-consciousness telling her zero figure was desirable among people.

"My unhealthy mind keeps thinking I need to be 110," she wrote in the caption.
Photo Source: Jenna Jameson, Instagram

Despite not trying to submit to the voice, she did continue with the diet, but maybe adding the calories like she wanted. And about two months later, on November 5, 2018, she announced that she had lost a total of 80 pounds in her weight loss journey.

With the success announcement, she also shared what she did daily during her entire journey. In the caption, she wrote, "I have officially lost 80 lbs. 👀. I’m going to give a little updated menu because it’s my most requested thing ever!" as she lists out her daily routine.

"Wake up at 8- have 2 Nescafé coffees with sugar free creamer and sweetener.
11 am I make 3 scrambled eggs with basil cheese I get from Costco (in a block) I share them with Batelli.
I then put Batel down for her nap at 1:30 and I snack on cottage cheese and have a fresca.
Batel wakes up around 3:30 and I make her lunch. Yes, I make her carbs lol she isn't keto. I usually make myself a HUGE bowl of arugula salad with vinaigrette dressing and LOTS of Parmesan cheese.
Then at about 5 I grill myself a big ribeye steak with asparagus broiled in avocado oil.
Then my fast begins!
So many people ask if I count macros or check if I’m in ketosis and the answer is no. I just eat sensibly and intuitively. Also I get asked about 'snacks'. My advice is stop snacking."

She fit in jeans of size 6 for the first time.
Photo Source: Jenna Jameson, Instagram

This little routine was updated after her 60-lbs/4-month weight loss on August 20, 2018. At that time, she wrote about what she ate to keep in track with her Keto diet.

Suggested: Is Chaz Bono Gaining His 85-Pound Weight Back?

"Let's talk menu. I get a lot of messages asking me what I eat in a day to stay in ketosis," she wrote in an Instagram caption that day. "Well, it's underwhelming. I am one of those odd people that doesn't need variety. Every morning I eat the exact same thing. 3 eggs with cheese and an avocado. Lunch is my biggest meal, I always eat arugula salad, grilled asparagus or zucchini with some kind of meat (usually a hamburger patty or grilled chicken) I then snack when ever I feel hungry (usually on almonds or macadamia nuts... sometime cottage cheese) that’s it! Then I begin my fast at 6 pm. I drink lots of water until I go to sleep at around 10 pm. I drink coffee at 8 am and I end my fast at 11 am. That’s it! No magic, no fancy diet... just clean whole organic foods. I waved bye bye to anything processed or packaged a long time ago. This is 60 lbs gone my friend. It can be done!"

107 lbs was obviously enough for the mother-of-one. Of course, she was letting go of the Keto diet as she no longer needed to lose any more weight. Seriously, she didn't. She's crossed the target her inner demon had pushed on her.

But to maintain the slim figure, she did not resume her way of eating that she accompanied the keto diet with. She went back to a little higher carb diet. She did not document her weight gain journey, of course. But when celebrating New Year's Day, she found out she was putting that weight back up again.

On a January 2, 2020, post on Instagram, she showed her "jumping off point" as she mentioned her weight was 153 pounds. She also announced she was getting back on the Keto diet to "take off 30 pounds" that she gained since stopping. But according to her earlier (November 2018) statement, she'd gained 46 pounds.

Truth be told, she did already mention she'd gained 20 pounds by early December 2019 because she decided to "take a break from #keto and live my best carby life."

Whatever the case, she was determined to get her better figure back. She announced she was going to slowly incorporate intermittent fasting and that she would again document her journey via Instagram.

But It's Getting Harder, Especially with the CoronaVirus Quarantine Period

During this journey, she's also added a little workout into her weight loss regimen. She's also mentioned her first keto menu for this time.

"1 cup of coffee with stevia and a splash of sugar free coffee mate.
Breakfast - Two eggs, Cholula garlic hot sauce and arugula wrapped in Parmesan Folios cheese wraps (purchased at Costco)," she wrote with the above Instagram photo in mid January.
"Lunch - sautéed zucchini noodles (ceecees veggie company noodles) bought at Whole Foods. I just pan fry them in a touch of butter with salt and pepper and they are so satisfying!
Dinner - Korean beef bowl. I sautéed cauliflower rice in a pan and then in a separate pan I fry up hamburger then add crushed ginger, coconut aminos, garlic and sesame oil. I top the cauliflower rice with the hamburger blend and then sprinkle green onion... and joila!"

Despite losing a few pounds, she also mentioned she's been fluctuating in weight this time. And according to her latest Instagram post in late April 2020, she's finding it extremely difficult due, with the nationwide quarantine in place.

And: Khloé Kardashian on Her Revenge Weight Loss Body

It's not easy to estimate the rate at which she would lose weight again. But it's clear she's not giving up on getting back her perfect shape again. Keep up with her updates.