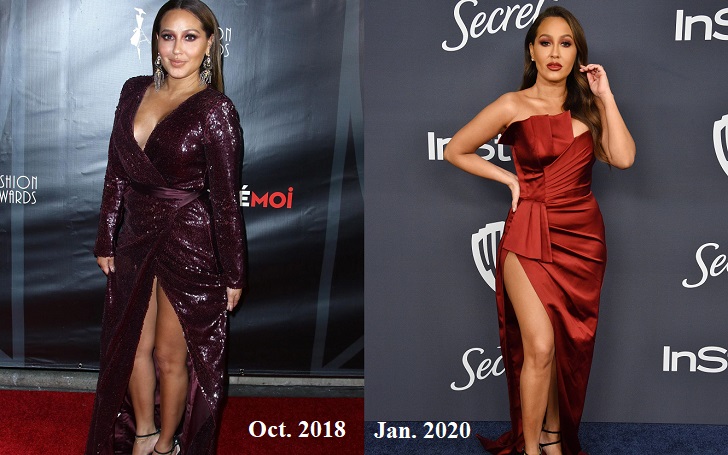 Check, check. Relationship status check. Adrienne Bailon seems to be doing well beyond expected for someone once associated with the Kardashians (although she doesn't like to be associated like that at all). Anyway, it's a positive drive for the singer, having married the love of her life, husband Israel Houghton, in 2016.

After a couple of difficult relationships, she'd finally found her man. Although, some were still scrutinizing her for dating and marrying the guy so quickly after the split from ex-fiance Lenny Santiago. The doubters would be disappointed with their falsity, as their life has never been better. And they went from friends to wingmen to lovers in a long while. But with the romantic side of things, she wanted more from the marriage — she wanted to look better after gaining some, following the wedding.

They were great friends years before they started dating.
Photo Source: Instagram

Adrienne Bailon, who enjoys a net worth of $5 million, went through two 20-pound weight loss journeys, once just before the wedding with her husband losing 25 pounds & her actual loss being 22 pounds, and the second time in 2019 after deciding to change her lifestyle for the better with her body. Fans & critics' comments and getting ready to be a mother capable of carrying a baby were her biggest motivations for her weight loss decisions. Plus, she did have it a little easier than her former boyfriend Rob Kardashian, in a similar journey.

In quick succession, Adrienne and her husband Israel went from being friends to dating to being engaged in Paris in six months and then married three months later on November 11, 2016 (we've discussed it all already before). Going the distance is one thing, but adding one unique flavor to the wedding day is quite something, isn't it?

That unique blend they brought to their wedding, or rather left behind, was a similar amount of weight they lost together. In between the time they got engaged in August 2016 and they tied the knot in November, Adrienne lost 22 pounds, and Israel lost 25 pounds with a similar routine. Specifically, they lost it all in the last two months before the wedding.

If you were tracking them at the time, then you know how different Adrienne looked in the stunning Walter Mendez wedding dress than before. And her trainer, Massy Arias, was there to get her to a proper height to weight ratio as she was "very tiny, she's 4'9," Arias told E! News after the wedding. "She's always had her goal weight in mind so she wanted to get back to a weight that she was comfortable with prior to gaining a few pounds."

So, Arias set the couple up with an intense fitness schedule. They also focused on healthy eating habits. They did it all without cheating at all. "She works out with me three to four times a week then she does homework that I give her at home so five days a week total," the trainer explained of the wedding weight loss workout plan. "90 minutes total per day. 30 minutes of cardio on her own in the morning and then one hour with me. That hour was maximized because our training would be divided into circuits and there was no resting time or breaks in between."

As for the diet, she had two plant-based protein drinks a day — one after waking up and one going to bed, a normal breakfast and lunch in between, along with Poke salads, eggs and avocado toast. As a pre-workout snack, she ate yogurt and cashews. There was no alcohol, no dairy, and a fixed goal to reach.

'New Year, New Me' Video Explains How She Chose to Change Lifestyle Instead of Diet to Lose Weight

2019 was a big year for Adrienne's weight loss journey. She'd been on and off diets over the years after the marriage and had a lot of insecurities about weight, according to her YouTube post on New Year's Eve 2019, specifically those comments (bad or good) on social media.

Bailon shared a vlog on her channel, 'All This Adrienne', to talk about how she lost 20 pounds in total in a couple of months in 2019. (She revealed she lost that much in November 2019 during the first episode of her Facebook series 'Wear It Well'.) She also mentions her trainer, Arias, in the video. But first, it's important to mention how those good & bad comments were a part of the inspiration for her weight loss endeavor.

Check Out: Missy Elliott's Weight Loss Journey Brought on by a Disease

"You guys have also inspired me in a major way, some in good ways, and some in bad ways. Some of your comments that were like, why does she have seven chins?," she says in her video at the end. "Or why does she look a certain way? That was something that I turned into fuel to be the best version of myself."

She'd also addressed the negative comments she faced because she never thought she was heavy in any way. "If I'm honest, my weight gain in the last few years has been like a struggle for me where I'm like, I never looked at myself as being overweight," she said in a 2018 vlog. "And it was weird to hear so many comments at one point that I was fat, and 'Oh my God, she let herself go!' I was like, 'Whoa.' So that was a little bit weird."

Watch: To Know What She Did for the 20-Pound Weight Loss, DO NOT Skip Over This Video (Because It's Not Mentioned in Words Here)

While cutting out carbs, eating right and exercising are common things you hear when anyone's losing weight, for her, losing the people you say are friends but really just are snarky about your looks became an instrumental factor as well. See the full video above for more.

Related: Khloé Kardashian Embarked on a Weight Loss Journey to Return with a Body She Labeled "Revenge Body"

She'd also already shared something about her journey you might need to know. She documented what she ate in a day in the video below.

In Between, She Had Revealed She Lost 10 Pounds in July 2019

Bailon has given several reasons why she started losing and how she got the confidence to push herself to be better along the way. In July 2019, she'd revealed she lost 10 lbs just before she was heading out to work out. "I've been super focused this month... Eating healthy & working out consistently! I'm proud of myself. I've lost 10lbs & I've gained some muscle that I see coming in. Finally lol. Whatever your goal is - You can do it!"

Like she later said, setting clear goals and sacrificing everything to reach them really helped her shed the excess weight in order to feel confident in the clothes she wore and not just cover areas of her body she felt too self-conscious about.

It's not new that every girl wants to be a mother one day, and it's been especially true for Adrienne Bailon, who declared in 2018 that 2019 was when they will start trying. She and her husband Israel have been thinking of expanding their family, besides Israel's four kids from previous relationships as well.

And they have been trying, but being pregnant hasn't been "what I thought it would be" for Adrienne. Still, when she does get pregnant, she wants to look the part, not just make people think she's "eating burritos and stuff".

Another reason she started losing weight was body confidence when wearing certain clothes, and she killed it in this one.
Photo Source: Adrienne Bailon, Instagram

In a November 2019 interview with Hola! Magazine, Bailon mentioned how "family planning" motivated her weight loss for 2019. "I knew that wanting to have a baby I want to be in the best shape of my life. I really buckled down this summer and just made it happen. I got into a routine of working out, so that the day I'm pregnant, I can continue to be consistent with working out," she told the publication.

She's already been planning out for her maternity style as well. "For my body type I definitely know that I'll have to wear more bodycon or form fitting things that like will show that I'm pregnant so that you don't just think I'm just out here, you know, eating burritos and stuff."

It would sure be her "biggest dream come true" when she gets a big surprise. And of course, her fans might be dying to wait for the little one to come when the baby does come. You'll just have to wait.