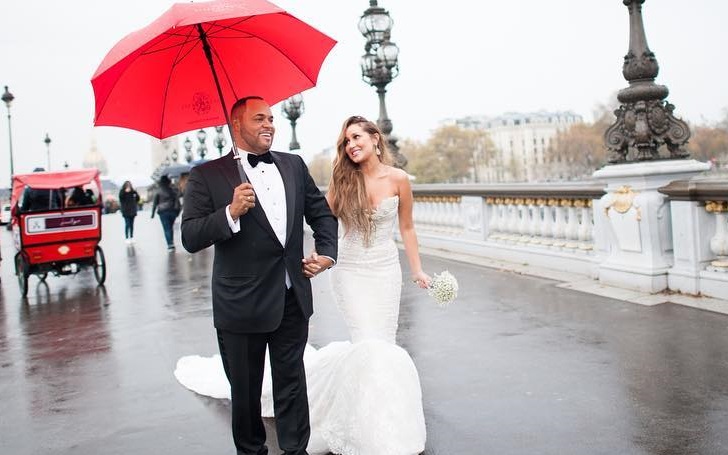 Adrienne Bailon has come a long way since being discovered at the young age of 16 singing in a church choir way back in 1999. But once she associated with the Kardashians, there was no going back.

Bailon is now happily married to musician Israel Houghton since 2016, but before settling down, she did go the distance with other people, neither of which had an easy ending. And since that thing with the Kardashians didn't go too well, she's been good at keeping her relationships out of the public eye, only sharing the information if there was an absolutely big announcement.

The thing that doesn't make her love life so bad is that she did not have a rebound relationship following every breakup. She moved on with a more serious relationship after every heartbreak. And she still is in a pretty good place with both of her exes. She holds a net worth of $5 million.

Rob Kardashian was the first noticeable relationship Adrienne had when entering into the music business. And she considered herself to have been still young in the business. When the two started dating in 2007, the relationship that was storied into 'Keeping Up with the Kardashians', everyone thought it was a match made in heaven.

Bailon was a frequent feature on 'Keeping Up with the Kardashians'.
Photo Source: REX/Shutterstock

However, the thing was only a two-year relationship. While the very public feud Bailon had with the Kardashian sisters was too much for her, the real reason was not what people thought it was. For one thing, Rob cheated on her.

When the breakup was confirmed in March of 2009, a source had revealed the relationship ended because it had gotten too difficult. And Bailon's talked several times about how being in the relationship always shadowed her reputation as an accomplished singer with the fact that she was practically a Kardashian.

Find Out If Vinny Guadagnino Is Dating Anyone Right Now

Even though the ending was rough, they reconciled their friendship over the years.
Photo Source: Getty Images

She also told Us Weekly in 2018, "I was like, 'Guys, but I've accomplished other things.' And I think that even got misinterpreted as me saying at some point I wish I had never done the show. I don’t think it was that at all … I just was annoyed that people tried to say that that was the only thing I had accomplished."

But the real reason was revealed when Rob dropped that bomb in an episode of 'Keeping Up with the Kardashians'. He admitted on air that he'd cheated on Adrienne.

Recommended: Ethan Suplee's Only Been with One Woman All His Life, Wife Brandy Lewis

The rumors of a possible reconciliation also circulated in September/October 2015, after her broken engagement. But she addressed the rumors at an event for Latina magazine saying they were just great friends, even after such a history. So she might not have completely regretted the relationship.

After the breakup from Kardashian, the former 'Cheetah Girl' was reported to have moved on in before the end of 2009 as she was seen texting an anonymous someone during an episode of the aforementioned MTV show. Meanwhile, Rob went on to have two more relationships in the past decades, both of which involved cheating of some sort, but only from the opposite end those times.

The man she moved on with from Rob Kardashian was Lenny Santiago, a music executive at Jay-Z's label Roc Nation, but she kept the relationship on the very down-low for years. It was only in early 2015 that people really got to know who she was dating, after they actually got engaged.

The relationship went so on the down-low for years.
Photo Credit: Bryan Bedder

'The Real' co-host revealed on her talk show that she was engaged to Santiago in February 2015 and explained how romantically he proposed to her. He took her to an empty restaurant while back in New York, where her parents were waiting, and he first gave a speech about how much he loved her. He then gave her parents all gifts and then awarded her with a box of carrots before getting down on one knee and gave her that huge, diamond engagement ring.

However, the relationship was not to last either. In September 2015, she announced on 'The Real' that she's "not engaged anymore" after having with her ex-fiance what she calls an " 'Eat, Pray, Love' journey."

"We're in a good place. It's not an 'awww' thing, I promise you," she explained as she admits he made her become a better person. It was all in good terms this time.

People might think that her next relationship was a whirlwind that shouldn't have happened that quick. But Adrienne Bailon and her husband Israel Houghton actually already knew each other years before they started dating. Details on her weight loss here!

The two started dating in early 2016 after one of her friends struck a nerve during a party when they were sitting in a corner. Actually, Israel had separated from his wife of 20 years at the time, finalizing the divorce on February 22, 2016, and she was setting him up with some of her friends. But one of them flat-out told her he was not the friend's type. The friend replied with "Why don't you date him?" And at that party, another friend told them, "You guys have old love."

In a September 2016 interview with People, she explains how the years-long friendship turned into a sweet romance, as she cleared some terms of starting a relationship with him before actually dating. So no, it was not a rush after both their past relationships ended that they decided to move on.

The Complete Timeline of Melissa McCarthy and Husband Ben Falcone

Another issue that came up when they were dating was that Israel was technically married when they started dating and then were first seen cozying up during a vacation in Mexico so quickly after the divorce. Some people thought that he'd cheated on his former wife with Adrienne, which resulted in the separation. But he defended the relationship via social media, clearing how the former marriage was already over way before they actually started dating.

Also, later, during an episode of 'The Real' on October 29, 2019, the host revealed how called her publicist to do some online "investigating". That was alongside confronting her now-husband back then about some terms, as we mentioned earlier before dating.

The romance thus caught on really well as they got engaged only six months into dating on August 12, 2016, in where else but Paris. She did the big reveal showing her incredible ring in front of the Eiffel Tower while 'La Vie en Rose' played in the background on Instagram.

Then three months later, on November 11, 2016, Adrienne Bailon and musician Israel Houghton tied the knot at the Hotel Plaza Athénéel in Paris, surrounded by close family and friends.

"I genuinely just feel so blessed and grateful. I’ve honestly never been happier in my entire life," she told People at the time. "I’ve never felt what I feel right now. I can't even describe what it is, but it’s such a peace mixed with total excitement."

After the marriage, she became step-mom to Houghton's four kids from his first marriage. And while she's had the best time of her life being married to her best friend, the difficulty has been in starting their own different family. Fans ask her regularly about how she looks pregnant, but it's actually not easy at all for Bailon. So, she actually completed a resolution to lose weight in 2019.

"It isn’t what I thought it would be," she told the audience when asked by co-host Loni Love about starting a family. "I've had to come to peace with that it'll happen when it's God's timing and I believe in that and I have faith in all of that. But it can be really discouraging and it can be really frustrating."

Whatever the case, the relationship is going really well for the couple. A lot of PDA is visible on her Instagram handle, when she does share photos of herself as a couple with her hubby.

Stay tuned and connected to IdolPersona for more relationship stories.

Anastasia Karanikolaou's Boyfriend and Past Relationships — Here's the Timeline

Rob Kardashian's Relationship History — Does He Have Anyone Now?