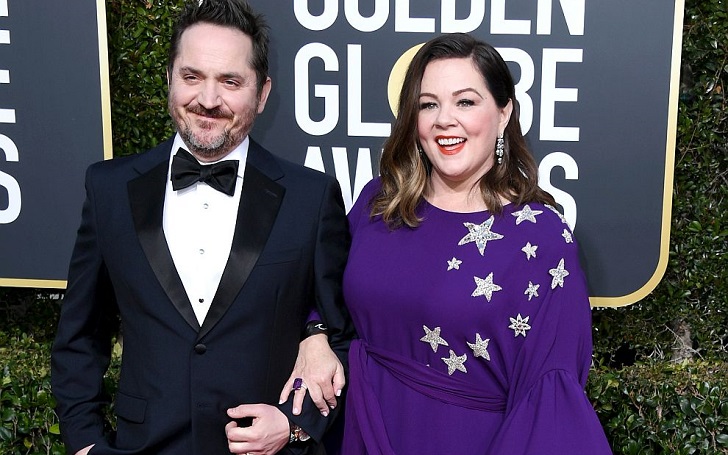 Melissa McCarthy shined during the early years of her career, those years in the early 2000s with the likes of 'Gilmore Girls' and even 'Charlie's Angel'. While her professional career went flew off since then, her personal life has been more inspiring than anything, that actually started before she got her big break. Yeah, because she's had someone to enjoy all of that with.

It's not like there's a man behind a successful woman kind of a situation as it was more kind of getting it done side-by-side thing when it came to McCarthy's romantic life. She's enjoyed the company of her husband Ben Falcone since 1998 and her kids for their entire life.

22 years together and still going as strong as ever.
Photo Source: Joshua Blanchard, Getty Images

Getting someone with the same interest in comedy helped pretty well for their life, and Falcone's been there for her through everything she's ever gone through, those struggles with weight and family life. But hey, as an example of how a Hollywood couple it, they do get over every one of those obstacles with ease.

First Meeting: During Comedy Training in an Infamous LA-Based Troupe, The Groundlings

That little cliché of a movie-like love story is actually one of the best things about the comedy couple. Acting didn't begin that quick for the McCarthy cousin as Jenny McCarthy was already getting her own freaking show after the mid-1990s.

At the age of 26, in 1996, she moved to Los Angeles to sharpen her comedy skills. She joined the infamous improvisation and sketch comedy theatre, 'The Groundlings'. And so did husband Ben, a little later, presumably. The two met in 1998 during a comedy writing class at 'The Groundlings'; it would change things forever for them.

But before that, they actually were in the same party a decade earlier, when she was in college and he was in high school. They didn't talk at the time. Little did they know, they had another fated meeting. And when they did, Ben exclaimed where he knew him from.

Recommended: The Real Truth Behind the Marriage Rumors of Missy Elliott

Ben's performance of a skit about "an inmate that really liked his new roommate" really impressed Melissa on the very first day. "I immediately was like, 'Oh, he's strange. I like him'," she recalled on 'The Ellen Show'. "And we were friends from, like, day one."

Their first work together was a Bob Seger-themed holiday, titled 'All Seger's Eve' as they got to know each other better. "We just howled," Falcone recalled. "We were Christian singers bringing the religion back to songs."

Working First Time Together on Screen and Getting Married

Ben's career started a little later than McCarthy's as she got her break in 'Gilmore Girls' in 2000. When the husband did start his career, he only came to the show in 2003, and it was only once. They worked on one scene together on that episode.

The 'Mike & Molly' star actually credits her husband for getting through her weight difficulties. And it was obvious it was time for the two to take the relationship to the next level. After eight years of dating, they got married on October 8, 2005, with a private ceremony at the Oviatt Penthouse in Los Angeles.

Settling Down with Two Children and Working Together in Multiple Projects

In January 2007, the couple announced Melissa was pregnant with her first child together as her character 'St. James' pregnancy was written out in 'Gilmore Girls' after the reveal. Then, on May 5, 2007, their first child, daughter Vivian Falcone, who is the exact copy of her mother, was born.

The couple went on to welcome another daughter, Georgette Falcone, on March 22, 2010. Melissa was set to appear in 'Mike & Molly' at the time, and she was really tired from a life as a mother-of-two. Still, she started filming for it four months later. And of course, it was another great show from her, with an Emmy win for her role.

Both their daughters kind of shock Melissa as they have more confidence than her. But it might've been attributed to the fact that the parents have been raising them to be strong. And Vivian's already appeared as a younger version of her mother's character in 'The Boss' in 2016. Ben directed that one.

Must-Read: America Ferrera and Husband Ryan Piers Williams Are the Most Dynamic Couple

As for the partners' careers, they started to work together more often than before, and it never hampered their relationship. Their major work was their first serious work in the 2011 movie 'Bridesmaids'. 'Identity Thief', 'Tammy', 'The Boss' (of course) and 'Can You Ever Forgive Me?' were other projects together as they even played themselves on 'Nobodies'.

In May 2017, the husband also released a book on raising their kids titled 'Being a Dad Is Weird', and Melissa wrote the foreword for it.

As they live their life together, with vacations and projects all along the way, there's nothing that can stop them from walking that mile alongside each other. They will celebrate their 15th anniversary this October, and this will be a special one.