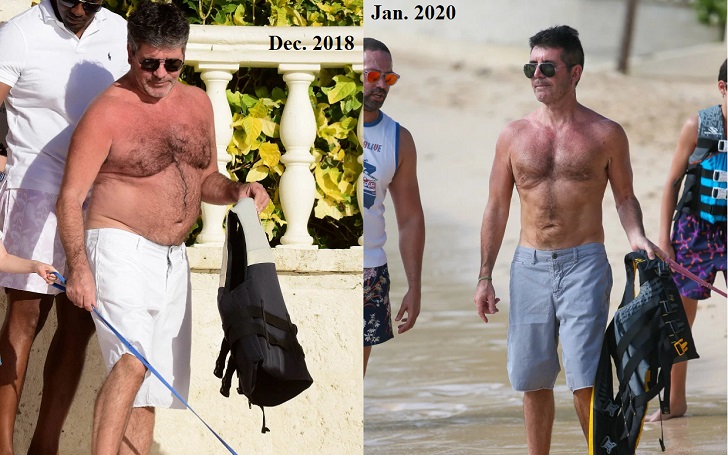 If Simon Cowell praises your performance, anywhere, you know you've hit got the biggest break at that very moment already. Of course, praising someone else goes rare for the multi-platform judge, so does the comments on his own status.

There are certain moments in life where you're suddenly aware of something wrong with your body, and such a thing came for Cowell as well when he fell down the stairs in his London home in October 2017 and had to be taken to the hospital immediately.

Cowell had to judge his own lifestyle after the horrible fall.
Photo Source: NBC

Thus, Simon Cowell underwent a 20-pound weight loss after that incident and is feeling pretty good about himself. His secret, he revealed, was avoiding red meat, dairy, sugar, bread and gluten, plus drinking his favorite Corona Premium Light beer, but in a very limited amount. That, he felt, was the biggest silver lining from his restrictions in the lifestyle.

Cowell Blames His Staircase Injuries on His Unhealthy Lifestyle

At one morning, Cowell had just fetched a cup of hot milk when he was believed to have fainted and fallen down the stairs. He'd returned from a Little Mix concert and woke up around 6:45 am. He returned home the next day, all ready for the next Sunday's show.

Cowell was not deterred by the cameras around.
Photo Credit: Peter Jordan, The Sun

After that incident, he had some time to think about it and had a revelation about his lifestyle. He said he was living "like a vampire". He conceded he used to work until 8 am and then sleep until 3 pm. That, along with stress, was detrimental to his health. And then he started to rethink his priorities. He stopped being a workaholic and focused on a more personal priority — His son. He vowed to change his lifestyle, which would ultimately lead him to a weight loss journey, for the sake of then three-year-old Eric Cowell.

"I was like a vampire. For years I would not go to bed until eight in the morning It was a wake-up call. I think stress, if you want my honest opinion, is the biggest killer of all," he admitted in an interview in November 2018. "I've stopped all the crazy late-night phone calls and the late-night meetings. That was the problem. Suddenly you go, 'I can't live like this anymore'. You don't want your son walking in when you’re always asleep in the afternoon. I mean, that's not great."

His son was also a big influence on his weight loss journey.
Photo Credit: Rex Features

He was not caring about the ratings anymore, and he has no regrets about the changes he made to both his business and his life. "My perspective on life is slightly different than it used to be. I used to be really competitive, read the ratings and have white knuckles. Now I find it funny," he continued. "At the end of the day, I always go back to Eric [his son], who will hopefully one day be running these shows — one day, please God."

Simon Cowell Is Proud of His 20-Pound Weight Loss

That was a big tipping point in his life. It's the year 2019, and he was ready to hit that 60-year-old milestone that October. He's become aware of his mortality and made major changes in his health. Of course, that included his diet and the physical side of things.

During an interview with Extra TV in May 2019, he revealed that he shed "about 20 pounds" of weight since the staircase incident and was feeling "much better." But he's been missing pizza as the criteria for his lifestyle change omits it from his diet.

He credited a switch to a vegan diet for his weight loss as he told The Sun in April 2019, "I cut out a lot of the stuff I shouldn’t have been eating and that was primarily meat, dairy, wheat, sugar," also adding, "If I was on a one to ten scale of being handsome, I was an eight and now I've gone to an 11."

Suggested: How Adrienne Bailon Coasted Through Her Weight Loss Journey

Cowell actually spoke to an expert under the suggestion of his doctor friend and overhauled his diet. "A friend of mine, who is a doctor, recommended speaking to an expert, and I did it on a whim. I was allergic to melon, so I didn't eat it for six months, but I saw this man and he explained it and it made sense," he continued. "Within 24 hours I changed my diet and I've not looked back since. You feel better, you look better."

For Cowell, His Weight Loss Is Attributed to Eating Changes Without Much Exercise

All of his comfort food items, jam tarts, hamburgers, spaghetti Bolognese, were all cut out from his list. Additionally, the beer and cigarettes had been moved to become "occasional".

When he asked his doctor for guidance on his drinking, " 'Maybe not quite as much as you had before.' And I did it and I stuck to it and it's easy."

Of course, still being able to drink his favorite alcoholic beverage - Corona Premium Light was going to make him happy. But it was particularly how he looked that made him say "wow" when he looked at the mirror.

Check Out: Khloé Kardashian Weight Loss Was As Part of Revenge on Her Ex

"The most dramatic period was the first month where most of the weight comes off and you look at yourself and think 'wow'," he told The Sun during his annual festive trip to Barbados. "I used to be 36 inch waist and now I’ve lost four inches. I'm really happy now. You can drink this light beer but you've got to be sensible about quantities. I have loads more energy and feel great."

And then, he became better than he ever was before.
Photo Credit: The Mega Agency

He was joined by his son, Eric, and partner, Lauren Silverman on vacation. And in his lifestyle change, Eric has been really inspiring. He's not like the other kids who crave for ice cream and such. He practically has the same diet as Eric.

"Apart from ice cream, he actually likes water, and eats all his raw vegetables. I'm on the Eric Cowell diet."

Did Simon Cowell Lose Weight? All the Facts About His Weight Loss!