Home / health / Did Simon Cowell Lose Weight? All the Facts About His Weight Loss!

Did Simon Cowell Lose Weight? All the Facts About His Weight Loss!

Find out all the facts you need to know about the weight loss of the English television personality Simon Cowell.

Simon Cowell is a well-recognized television personality, entrepreneur, producer, and record executive. He is best known for being a judge on the British television talent competition series 'Pop Idol,' 'The X Factor,' and 'Britain's Got Talent.' Additionally, he's also been a judge on American talent competition shows like 'American Idol,' 'The X Factor,' and 'America's Got Talent.'

In recent times, Simon Cowell made a successful weight loss journey, losing 20 pounds in the process. Many people are curious to learn how the 60-year-old star was able to achieve such a feat. Therefore, we compiled some detailed information on the matter given below, so you can find out his weight loss secrets.

How Did Simon Cowell Undergo a Successful 20-Pound Weight Loss?

What sparked Simon Cowell to lose weight in the first place is after the occurrence of an incident in October 2017 when he suffered a fall on the stairs of his home in London. At the time, he blamed his unhealthy lifestyle for the injuries he sustained. He decided he needed to bring a change in his lifestyle to maintain a healthier living.

Simon Cowell started by changing his eating habits. He admits he used to eat unhealthy food items and especially sausage rolls, hamburgers, and his favorite jam tarts made by his personal chefs. Additionally, he indulged himself in eating lots of fast-food products with very little physical activity in his life. He completely transformed his diet by transitioning to eating healthy organic food items and avoiding processed foods.

'The most dramatic period was the first month where most of the weight comes off, and you look at yourself and think 'wow',' Simon told The Sun. 'All I do is avoid just red meat - white meat is fine - and I eat loads of vegetables, salads and drink this great beer.'

In this current lockdown period, Simon's spending time by cooking some healthy dishes himself. 'I'm doing a bit of cooking. I'm exercising. Funny enough, more during this time as well, sticking to the diet,' he said. 'If you're on a diet, you have to keep the food sensible, but it's got to be interesting and tasty, then the diet's surprisingly easy.'

Simon's weight loss routine also consists of a vegetarian diet, which plays an essential role in cutting pounds. An article by Express reported Simon's cutting of meat and dairy products from his eating regimen was the major contributor to his weight loss. He also got rid of wheat, sugar, and fish from his diet.

'I cut out a lot of stuff that I shouldn't have been eating,' Simon said. 'And that was primarily meat, dairy, wheat, sugar - those were the four main things.' He also avoids yogurt and cow's milk for most of the time, replacing them with drinks almond milk instead.

Check Out: All the Facts About Sean Murray's Impressive Weight Loss Journey 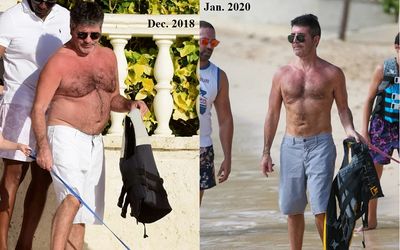