What Is 'Narnia's 'Lucy', AKA Georgie Henley, Doing Now?

Maybe 'Narnia' was part of your childhood, maybe it was not. But for those it was, Georgie Henley was a big part of it. Or if they didn't know her real name, 'Lucy Pevensie'. What's she been up to lately? She's been back after a little hiatus from acting and all.

But there's more than that meets the eye with Georgie Henley, other than how beautifully she's grown up since her Narnia days, that's counting 'The Voyage of the Dawn Treader' part. It's hard being a princess, but she's made sure to place her position as a inspirational figure.

Henley only did the 'Narnia' movies back in the day, except for 'Jane Eyre', and she was not getting a role until 2014's 'Perfect Sisters', or choosing not to. She's only done a few more movies and series, since then though. But she's had one big milestone in the industry.

Georgie Henley Is Big LGBTQ+ Supporter, Creating & Directed a Short Movie Around It

Henley just turned 25 a month ago. And if you're here after a long time, then you know how incredible this is for her. One look through her Instagram page will tell you what she's been doing these days. Brushing aside her concurrent throwback to her 'Narnia' days, she really supports the LGBTQ community.

Henley has grown up to be a fine 25-year-old lady.
Photo Credit: David M. Benett, Getty Images for dunhill

The Pride Month is no stranger to Henley as she's dedicated the occasion to the community every year. She's also featured in 'a queer anthology of healing', a poem collective, with her own, 'Clare'. Yeah, she's a poet too, with another one titled 'Blush' recently published on 'fourteen poems' issue 2, another queer poetry anthology. And there are a lot more.

She also took a leap from acting into direction as she wrote and directed a short movie of her own, 'Tide', in 2016. That was her first and the only one yet. It's about the relationship of a young lesbian couple.

She's Always Been Connected with Fantasy Land and Princess Stuff

Before getting into poetry, Henley was active again with more than one acting cameo, or rather big roles of just the right kind for her. She got her entry in another princess series, 'The Spanish Princess', a history-related one. She was cast for six episodes but may not return for when the second season returns.

To this day, it seems she continues to be connected to such roles as ever. But probably the most exciting event for her "would have been" her involvement in the 'Game of Thrones' series, had it not been canceled for an indefinite amount of time.

She was already a part of the pilot of the prequel series 'House of the Dragon' (filmed already), which was slated for a May 2020 release, before it was put off. It was, however, stated to be for 2022, but the future is still unknown. She was the star alongside Naomi Watts, but she'll have to wait for that exposure.

Either way, she's doing fine, unlike her 'Narnia' co-star, and once rumored romantic interest (wink, wink), Skandar Keynes ['Edmund Pevensie']. Although, it was his decision to leave acting to be involved in politics, like actual politics. On the other hand, Anna Popplewell ['Susan Pevensie'] also joined a historical, princess-y role in 'Reign' and is still actively acting with a similar frequency as Henley.

Also See: Where Jonathan Antoine and Charlotte Jaconelli Are Since Their 'Britain's Got Talent' Showcase in 2012

William Moseley ['Peter Pevensie'] is the most active of the quad, although his activity is not that huge. But having four pending projects is still very impressive. The stars do get together, virtually or face-to-face, and reminisce their days working together.

Stay tuned and connected to IdolPersona for more celebrity news and updates. 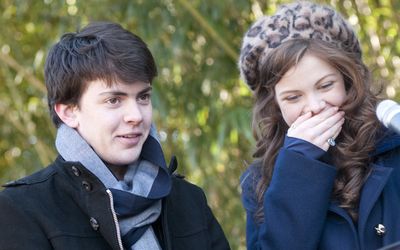