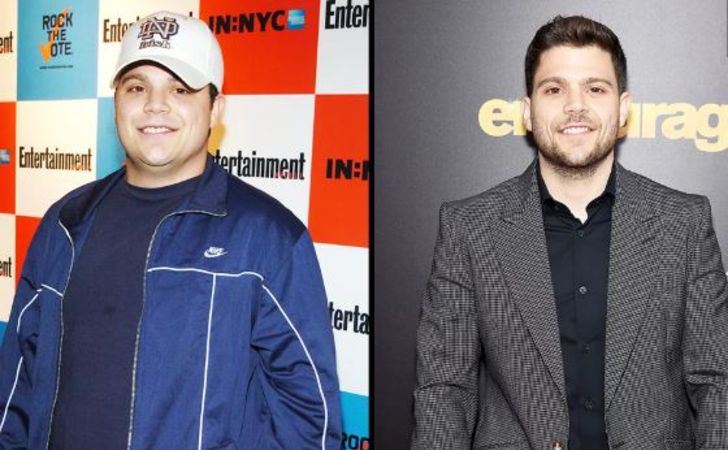 If you might not be the fan of 'Entourage' actor Jerry Ferrara by now, then you might be after knowing his amazing weight loss transformation.

Brooklyn-based actor Jerry Ferrara is one of Hollywood's valuable assets, who gave us some top movies like 'Battleship,' 'Last Vegas', and Entourage.' With two decades into the entertainment industry, the actor not just amassed a colossal net worth, but also massive fame. Besides all the professional accomplishments, the hard work he's put in, especially to enhance his appearance and shape through a weight-loss mission, is equally impressive.

Popular with his character, 'Turtle', anyone would be surprised to see the former self of Jerry Ferrara. Interestingly, he changed his regular lifestyle a little bit, incorporating new diets and exercise in order to slim down. Eventually, all the midnight oil he burnt did pay off as he was successful in losing a whopping 40 lbs in just ten months. So, without wasting much time, let's know how did the film star achieve such a difficult task so quickly.

For an actor who already achieved significant heights as 'Turtle' in 'Entourage', he didn't need to cut down on the weight to fit in for any films or roles. However, the reason that tempted him to focus on his body size was none other than the health risk that his big weight might have caused.

It all began ten years ago, during the sixth season of 'Entourage'. Just three months before his 30th birthday, the actor went through a physical test, where he weighed about 200 pounds. Well, he did pass the test, but for someone with a height of 5'7, the weight meant quite large to create a balance.

While the actor was aware of the imbalance, he did consult a doctor as well, who did warn him how the size could cause several health problems and diseases. Although that could have been just a means to get the actor to lose weight, Ferrara did take it seriously and went on a mission for himself.

I didn't get in shape because of anything having to do with the public. The main goal was to just get healthy.

In the past times, Ferrara's body size has been a subject of serious criticism in public. However, he couldn't bat a eye on what others said and clearly ruled out the possibility of him slimming down for the haters. When he was overweight, he always felt tired and couldn't even do a complete workout. Thus, the goal of getting slim was just to get healthy, not to give the haters a message or get a job.

It is a known fact on how food changes remain pivotal to shed down some pounds for beginners. Likewise, it was the same route that Jerry opted for initially. Moreover, he took help from a nutritionist, who happened to be his friend's wife. She did suggest him a yo-yo dieting, which slowed down his metabolism at first, but didn't prove to be much influential.

When the 'Entourage' actor first went on a diet, it was extremely difficult, resulting in him going on a meltdown and almost giving up. However, he did stick down to the tough nutritional intake for a consecutive 20-days, which did prove worthy. Surprisingly, he gave up after that, just to go on another 20-days streak, and it was then when changes started to occur. The diet slowly became a habit, and it all panned out well.

Talking about his diet in an interview, Ferrera claimed how he was tired of getting to eat whatever he wanted in the past, one of the main reasons why he was overweight. So, after a few months, Ferrara went on a regular diet, with a reduction in carbs and more vegetables and protein in his menu.

Going through the diet alone wasn't enough to lose weight. All the health-conscious people might relate to this as other factors, like exercise and lifestyle, play equally essential roles. Interestingly, Ferrara started playing sports yet again to burn down the carbs and get healthy. It was kind of a throwback for Jerry, who used to play during high school to get back to basketball and boxing.

Similarly, he started going on a walk and jog around a little bit, be it outdoors or in the treadmill itself. In fact, he went on a routine, playing basketball one night a week, box one day a week and do weight training in the gym on a recurring basis. In addition to that, he had a recovery day, the days he preferred taking Epsom salts baths.

The 40-year-old is inspirational for many reasons in his acting life, but one of the other things you could learn from him is how he quit smoking to achieve the goal of losing weight. Smoking is more than just a habit, as once you are used to it, you become more of an addict, so that was very difficult for the 'Power' actor. Ferrara owes significant credits to his then-girlfriend, Breanne Racano, who held his side through all the tough times. The two tied the knot in 2017.

You May Also Like: Sara Rue Weight Loss - She Stopped After 50 Pounds on Jenny Craig.

Even though Jerry began working out and took on a strict diet to get healthy, after losing 40 pounds in ten months, it did help him in the long run, including his professional career. A slimmer self enabled him to get the role of 'Jeremy Kern' in 2014's movie 'Think Like a Man Too.'