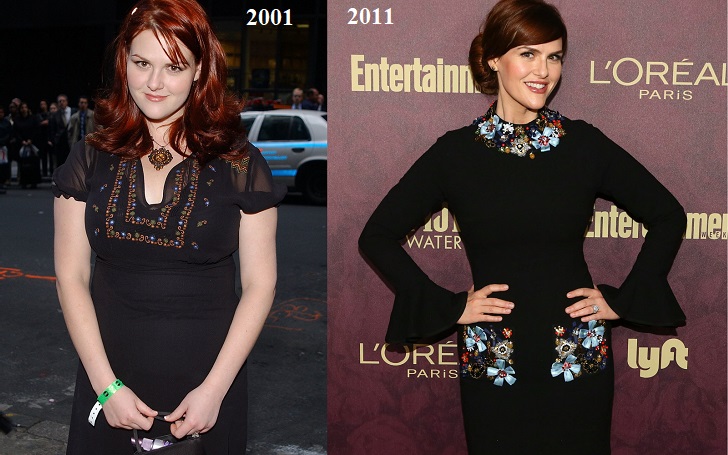 For years, Sara Rue had put off talking or even thinking about her weight and just took on roles that needed a little bit of a heavy person. But when 30's hit her, a sudden interest in where she would be 5-10 years from then changed the perspective she'd looked at weight all this time.

Rue had an image for herself in the future and where she was then was not in that target trajectory. She wanted to be comfortable under the skin, and she was not at the time.

Sara Rue thus became a spokesperson for Jenny Craig's weight loss regimen since December 2009 and lost 50 pounds in the next year. She'd originally set a target of 30-pound weight loss since she was having a hard time with the start of the journey. But as she found it easier, she just extended the target but did not proceed further because she didn't want to be "skinny".

Food is always the big thing people want to create a better relationship with if they want to lose weight. For Rue too, she did not have such a good relationship with food. But she wanted to leave that image she had in 'Popular' and 'Less Than Perfect' behind.

In December 2009, she signed on as a spokesperson for 'Jenny Craig', personally meeting with the CEO Patti Larchet and getting inspired from her journey of how she became the head of the company from being a consultant.

Rue who enjoys a net worth of $1 million, first set a target of losing 30 pounds, but the first month was torture for her as she was dealing with emotional issues as well. But once she started believing she had to move forward too as time did without waiting, her mentality of 'I don't believe it's ever going to happen' transformed with help.

Similar: Timothy Spall Had Enough of Being a Side Character & Thus Underwent Weight Loss

After meeting & surpassing the 30-pound weight loss target, she felt good but not done with it. She took it a step further and lost 10 pounds more. Still, that feeling of satisfaction did not get to her, she drove on. But when she crossed that 50-pound mark, she was extremely comfortable and felt that she was done with it.

I'm done. I'm never going to be a skinny girl, which is good. That's just not my thing. It's more about health and truly being comfortable in your own skin.

She was down by four dress sizes and wore a bikini for the first time publicly in April 2011. And yeah, her wedding was also near, and it was a huge thing for her to look amazing on her big day as well. But she was not skipping the wedding cake at any cost. In fact, she had slices of three of them.

And there it was. She started wearing bikinis more often.
Photo Source: Pinterest

Sara's trick to weight loss? The maintenance plan of Jenny Craig was enforced on her since July 2010, which consisted of a 1,700-calorie-a-day diet and cardio workout four days a week.

"I try not to eat animal protein after 7:30 p.m.," she told People with the introduction of her bikini photo. "And when I make pasta, I layer the bottom of the bowl with fresh spinach. That way you’re having the pasta, but with half the carbs."

She Was Off to Inspire Others with 'Shedding for the Wedding', But Her Daughter Is Her Biggest Project

Don't forget, her then-fiance, now-husband, Kevin Price, was in the stands as her number one fan during her journey to feeling comfortable under her own skin. He even ate the food under Jenny Craig's recommendation for Rue together to give her support.

The wedding became as joyous as it can ever be.
Photo Source: Pacific Coast News Online

"I'm really lucky. I know how lucky I am. I feel really grateful," she told Parade in mid-2010. "He said something really sweet. He was like, 'It's not like I love you anymore, it's just nice because you love you more.' He's such a good man and he's been so supportive."

After her own success, she was off to support others to lose weight in preparation of weddings of their own. She became the host of the CW's 'Shedding for the Wedding' in 2011, which did not go on further than one season.

In her pursuit to inspire people, her daughter should probably come first. Rue herself maintained her weight with exercise and clean eating. Even after the birth of her first child, Talulah Rue Price, in 2013 and her second child, Adelaide Rue Price, in 2016, she's been able to keep that 50-pound weight off of him.

Their kids seem to be growing well with her guidance.
Photo Source: Sara Rue, Twitter

However, the story might be a little difficult for her kids when growing up. As a toddler, anything they voluntarily put into their mouth, they would want it to be taken away. And Rue has been careful in not pushing too far when avoiding her kids those certain delicacies that they want.

"I never say, 'This is good for you, this is bad for you' — ever," the 'Impastor' star told Yahoo Celebrity in November 2015. "I try to gently steer her away from things I don't want her to eat too much of, but I also don't want her to be the kid at the birthday party who eats the entire cake because mommy never lets her eat it at home."

Suggested: 'How I Met Your Mother' Star Jason Segel Was Forced for Weight Loss

She was promoting her new weight loss initiative, 'Resolve Now: Stay Ahead of the Curve', at the time. So far, so good as Talulah has been a good eater, and you would hope the same for Adelaide.

Sara Rue Weight Loss - How Did She Lose 50 Pounds?