Sara Rue Weight Loss - How Did She Lose 50 Pounds?

Grab all the details on the weight loss of the American actress Sara Rue.

The American actress Sara Rue is best known for her role as Carmen Ferrara on 'Popular,' and Claude Casey on 'Less than Perfect.' She also worked as the host of The CW reality series 'Shedding for the Wedding.' Additionally, she is also involved in television series like 'Rules of Engagement,' 'Malibu Country,' 'Impastor,' and 'A Series of Unfortunate Events.'

Sara Rue's successful acting career is not the only thing that can be considered as a highlight of her life. As a person who struggled with weight loss her whole life, Sara's weight loss can also be considered as one of the achievements in her life. We collected some information on her weight loss journey, so you can also get some idea if you are aspiring to lose some pounds.

Sara Rue weighed much more before she embarked upon the weight loss journey. She did not think much about her weight in her 20's, but when she hit 30, she came to a sudden realization. She describes what she felt at the time when she became aware of the state of her body. 'When I turned 30, I had this image of myself and where I wanted to be in five, in 10 years,' she told Cosmopolitan. 'But the reality of my situation just didn't match up. So it was as simple as that — and as complex as a thousand other things going into it.'

Sara Rue began her weight loss journey at the age of 30.
Source: Cosmopolitan

'As an actor, there are certain roles that you really can't play or be cast in when you're overweight,' Sara added. 'But I don't want to sensationalize it; my weight loss was more of an internal thing, and it was about mentally and physically wanting to be in a place where I could feel really comfortable in my own skin.'

Thus she chose to lose weight and worked hard for it with strong determination and commitment. First of all, Sara Rue brought a huge change to her eating habits. She controlled what she ate and also when she ate. She got rid of all the junk and fast food products. She also kept her cravings under control as she did not want to risk snacking all the time.

Another major change Sara brought to her diet routine is she incorporated a plant-based diet in her eating routine. Instead of munching on chips and cookies, she instead focused on eating healthy organic vegetables and fruit. In doing so, she succeeded in losing 50 pounds in the process.

Check Out: Did Simon Cowell Lose Weight? All the Facts About His Weight Loss! 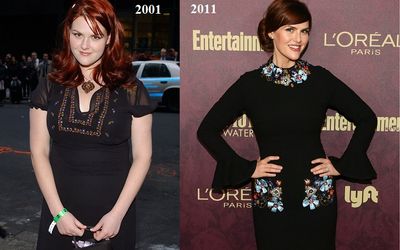