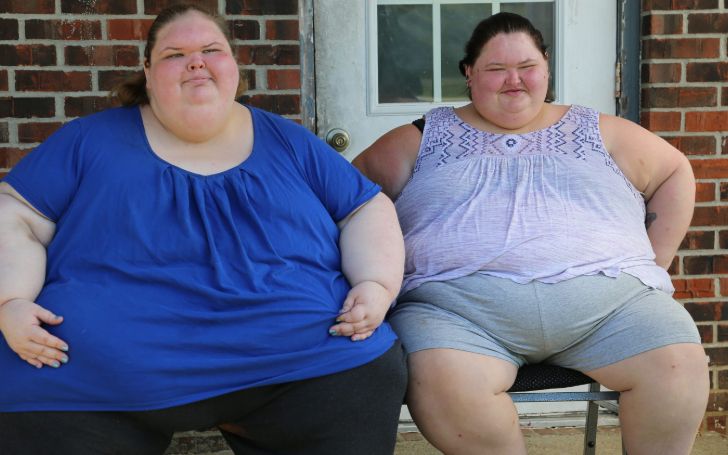 Here are the top 5 facts about the Slaton Sisters.

Amy Slaton and Tammy Slaton are two YouTube sisters from Dixon, Kentucky. They call themselves the Slaton Sisters, and they are famous for the videos of the everyday activities they upload on their YouTube channel.

Slaton Sisters are popular for their YouTube videos that showcase their daily activities at their home.
Source: Distractify

Amy, 31, and Tammy, 32, weigh a combined weight of a little over 1000 pounds. In their YouTube videos, the siblings encourage their viewers to help them buy collectable candies, chocolates, and sweets from their Amazon wish list.

Besides the sisters themselves, their parents also make appearances in the videos sometimes. The siblings refer to them as Mama Slaton and Daddy Slaton.

Here we present you the top 5 facts about the popular Slaton Sisters you didn't know before.

The Slaton Sisters Decided to Perform the Weight-Loss Surgery

The Slaton Sisters, Amy Slaton, and Tammy Slaton weigh about 400 pounds and 600 pounds, respectively. Tammy is unable to walk on her own. She uses the walker to move around the house or to go somewhere.

Tammy requires the walker to move around.
Source: YouTube

Recently they are trying to lose weight by doing the weight-loss surgery. But to perform the main operation, the sisters first must lose a little weight beforehand. In their recent videos, they portray their struggles with weight loss procedures and changes to a healthy organic diet.

The popularity of the Slaton Sisters skyrocketed when they uploaded a video of them playing "Chubby Bunny."

The game was a competition between the sisters on who could stuff more marshmallows in their mouths. Amy lost the contest. The video uploaded on 10 November 2014 accumulated over a million views and gained popularity on 4chan.

The Slaton Sisters Now Air Their Own Show on TLC

Now the fans of the siblings can watch their favorite sisters on TLC. The promotion of the sisters to the television will significantly help them with their fame.

The show's name is '1000 lb Sisters,' and it airs on Wednesday every week. The series starts with the current difficulty the sisters are facing with their weight loss routine.

Tammy Slaton now Has a Boyfriend

While Amy is already married, Tammy does not have a husband yet. Tammy Slaton put her relationship status on her Facebook profile as "in a relationship." This is the indication that Tammy now has a boyfriend.

When one of her male fans asked her out in the comments section, she replied," Sorry, I've got a boyfriend." Tammy did not give any clue about who her boyfriend is or what his name is, but we will pretty soon find out about it in the coming future.

Tammy Slaton Nearly Committed Suicide in the Past

As mentioned on Heavy, Tammy once tried to commit suicide. Due to her obese body weight, Tammy frequently used to go to the hospital due to blood clots, gout, bouts of pneumonia, and other medical procedures. Once, she was placed on life support due to extreme illness.

Tammy Slaton nearly committed suicide in the past.
Source: Heavy

After the visits to the doctor, Tammy did not leave the house for over 6 years. She started to suffer from depression and once came to a point when she nearly committed suicide. Since then, she decided to make changes to her body to live a healthy life.

Well, that's all you need to know about the Slaton Sisters.