Vincent J. Guadagnino became famous from his leading part in the reality television series 'Jersey Shore,' which aired on MTV. He was a member of the starting cast of the show from 2009 to 2012 and appeared in all six seasons. He has also featured in some other MTV series like 'The Hard Times of RJ Berger' and his own show 'The Show with Vinny', which debuted in May 2013.

The life of a reality star may look glamorous and happy from the outside, but most of the celebrities have many problems of their own. Vinny Guadagnino is no exception, as he's been struggling with weight issues throughout his life. Although the reality star now proudly showcases his ripped and fit body, he's come a long way, overcoming difficulties to attain this state. Below, we discuss how he made it to this point, how he put his dedication, commitment, and hard work into having the fit body shape he has right now.

Vinny Guadagnino recently shared some pictures of his dramatic body transformation on his Instagram page. The reality star showed astounding results of his weight loss with before-and-after pictures. Many of his followers on the social media platform were astounded by the changes in his body.

Since Vinny started his stripping career, he's been working hard to keep his body shape fit and healthy. The star gives the main credit for his fit body to the low carb and high fat based keto diet he's been implementing through his weight-loss journey.

Find Out About: What Missy Elliott Did for a Dramatic Weight Loss Transformation, The Story

The before and after picture came with a caption saying that he has 'struggled with his weight his whole life.' It looks like his hard work over the years to lose weight has ultimately paid off, as the reality star shows off a six-pack, along with defined pecs and abs. It seems like his struggle is finally over.

As already mentioned, Vinny's weight loss was chiefly contributed by his strict diet that limited carbohydrates and focused on the fat-based keto.

He has an Instagram page for the Keto Diet where he shares some weight loss tips:

He continued, "My genetics make me gain weight easily especially to high sugar/carb food. That being said I believe calories also matter.If you eat a surplus of calories a week you will gain weight and if you eat less calories than you burn you will usually lose weight (unless you're in too much of a deficit and your body goes into starvation). So if you figure out how many calories you need to eat a day and be in a deficit,you will lose weight."

He had written quite a long post about his diet, so we have summarized the main points below without any omissions.

These are the main points that can be taken from Vinny Guadagnino's weight loss journey and diet plan. And any doctor or nutritionist would absolutely agree with the points mentioned above. 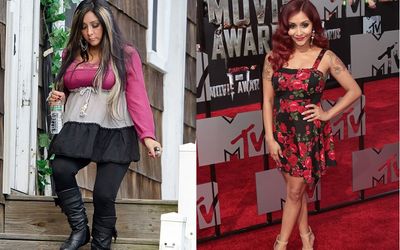