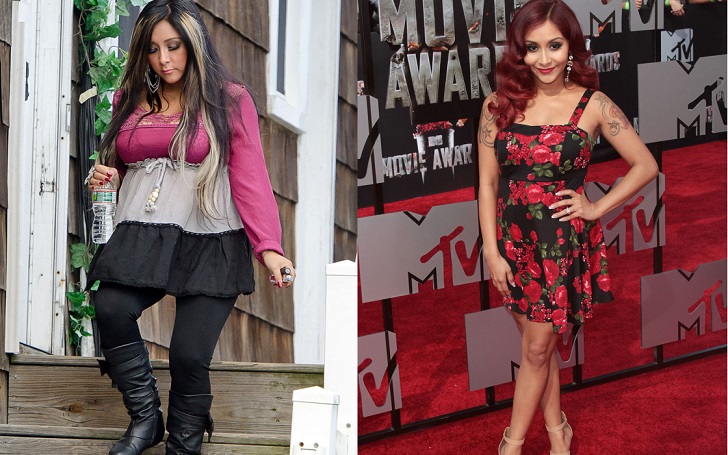 At one point, Nicole "Snooki" Polizzi weighed only 96 pounds. Now, you would think that's pretty concerning for a person to be that underweight, but Polizzi is only 4'8'', and a certain BMI scale tells us she's exactly in the mid-point of the height to weight recommended scale.

Polizzi gave birth to her first child, a son, Lorenzo Dominic Lavalle, on August 26, 2012. She left MTV show, 'Jersey Shore' as she gained a lot as post-baby weight. She was already engaged to now-husband Jionni LaValle before the baby arrived. And then come Halloween 2012, there was some serious makeover she wanted to do for her body.

So, Nicole Polizzi shocked everyone with her weight loss as she lost 44 pounds by January 2013 since the first baby's birth and was 96 pounds by September 2013, normal for a 4'9'' person. She continued working out with her trainer and eating healthy even after the birth of her second baby, daughter Giovanna in 2014. But at one point, she was also sued for falsifying the Zantrex weight loss pills' results.

Polizzi was a season regular on MTV's reality show 'Jersey Shore' from 2009 to 2012 before leaving the show and getting on her fitness ride. From being overweight during her time of the show, she's turned into a fitness figure for many girls with shorter-than-average height.

She'd gained more than 40 pounds after Lorenzo's birth and thus really wanted to shed a lot of it. But it wasn't easy. "It wasn't easy. I'm still working my ass off, but it's all worth it," she told People at Logo's season 5 premiere party for 'RuPaul's Drag Race' in January 2013. "I'm now motivated and I want to change my body. It's a good feeling to work out because I feel much better. Plus, my guy Jionni likes it."

She was pregnant for the first time in 2012.
Photo Credit: Instagram

Thus, since heading to the journey with healthy food and hiring a trainer in Halloween, she lost all of the gained weight and some more. "Right now I'm 109 lbs., and I've been working out with a trainer since Halloween," she said. "I go four times a week, and we do legs, arms, and everything. And after every one-hour workout, I do an hour of cardio."

Recommended: How Shonda Rhimes Succeeded in a 150-lbs Weight Loss

However, she was too modest in being considered a popular model. "I don't consider myself to be, like, a 'celebrity mom'. I don't even consider myself famous," she said in an interview on 'The Dr. Oz Show' in March 2013. "If I can lose 42 lbs. after giving birth six months [ago], I mean, anybody could do it. You just need the dedication, and you need to want to have your body back."

Some Concerns for Excessive Weight Loss, "96 Pounds Is Normal for Me"

Of course, with such a drastic change, there were concerns about her health. Plus, there were more critics than concerns. So when she wanted to have none of it, she slammed back at those critics. And she was perfectly happy with her weight.

"People are jerks," the mother-of-three told InTouch Weekly in a deleted interview in September 2013. "I don't look emaciated—I look healthy!" She adds, "My arms still jiggle when I wave! I'm 4-foot-9, which is the size of a third-grader, so weighing 96 pounds is normal for me."

For the most part, she hated drinking and wanted to be there for her son. Plus, she wanted to continue with her trainer and cardio to maintain that weight because she knew she could gain weight if she didn't. And she was right to do so. She continued with the same trainers, Anthony Michael and Adria Bogosian, of 'Anthony Michael Fitness' even after the birth of Giovanna.

She stuck with the same trainer since November 2012.
Photo Source: Instagram

However, something to justify her words would have to be her BMI index. If she really weighed 96 pounds at the time, it would've been the best figure anyone would ever be, according to National Heart, Lung, and Blood Institute's BMI scale. According to her height of 4'8'' and weight of 96 pounds, she would have a BMI of 21.5, which lies just below the midpoint of the recommended BMI, 18.5–24.9. And that is most definitely called a normal BMI.

So yeah, there really was no need for people to be concerned for her health as she was perfectly fine and just needed to be praised.

A Similar Speedy Success Followed After Baby No. 2

Giovanna Marie LaValle, Polizzi and then-fiance's second child together, was born on September 26, 2014, a month before they got married in November. Of course, after just giving birth to a baby, she looked a little heavier than she was after the first weight loss.

The couple was parents to two before the wedding day.
Photo Source: NEP/WireImage

Regardless, after the wedding, she continued the same routine she did before and managed to get back to her slimmer shape so that when she looks back at her 'Jersey Shore' clips, she would finally see that she was a bit overweight for her age.

Check Out: The Funny Story of How Kevin Smith Met His Wife

Since then, Polizzi and LaValle have welcomed a third child, Angelo James LaValle, in May 2019.

Here's How She Did It

Watch: Polizzi Shared Several of Her Workouts on YouTube As Well

It's part of the reason she has stuck with the same person for all these years. She's also discussed several other issues she had with her weight, how she juggled with it since she was a young girl, and how wellness changed for her. She also mentioned she takes out time from her hectic schedule to go to the gym at least four times a week.

In the aforementioned interview with People in 2015, she also detailed everything about her wellness habits, rigorous fitness regimen, clean-eating plan, and her daily indulgence. It seems she relied on the trainer for workouts as well as for her diet as he suggested his customizable meal system 'Anthony Michael Fit Food'.

Suggested: Sherri Shepherd's Weight Loss Might Inspire You Too

Meanwhile, 'Women's Health' met up with Michael and Bogosian in 2018 to detail what Polizzi does in the gym and exactly how each of her exercises is done (with her photos). Plank pop-up, lunge jump with lateral raise, side-plank reach and spread, plank walk with row, reverse lunge with curl, and curtsy lunge with jump press were all in their sample routine. Yeah, lots of planking and lunging were her secrets.

That Little Issue of Lawsuit against Miracle Diet Pills, Zantrex-3

Now, Polizzi has never mentioned Zantrex-3 in her later interviews, but apparently, she did promote the Zantrex-3 "dietary supplement" in celebrity magazines as well as on social media back in 2013.

She did use the product, but it might not have been the main reason of her weight loss.
Photo Source: Big Class Action

"Wanna look good like me? GTL & my fav Zantrex fat burner from Walgreens, it's on sale!" she'd tweeted in 2011 too. And when one Long Island woman tried it, it didn't work on her.

As a result, Ashley Brady filed a lawsuit in Long Island Federal Court in December 2013, accusing Zantrex & Polizzi of falsifying their statements and that the pills actually were dangerously high in caffeine.

Also: Why People Were Angry for Chris Sullivan Wearing a "Fat Suit"

Of course, Zantrex responded, a lawyer for them telling the lawsuit was baseless. And Zoller Laboratories, which was mentioned in the lawsuit as a manufacturer, filed a defamation countersuit against Brady’s lawyers, Manhattan firm Bursor & Fisher.

However, a statement would come out as weird to some. Polizzi later said that she was paid to endorse the product. Of course, the causes of Polizzi's weight loss were other than the pills.