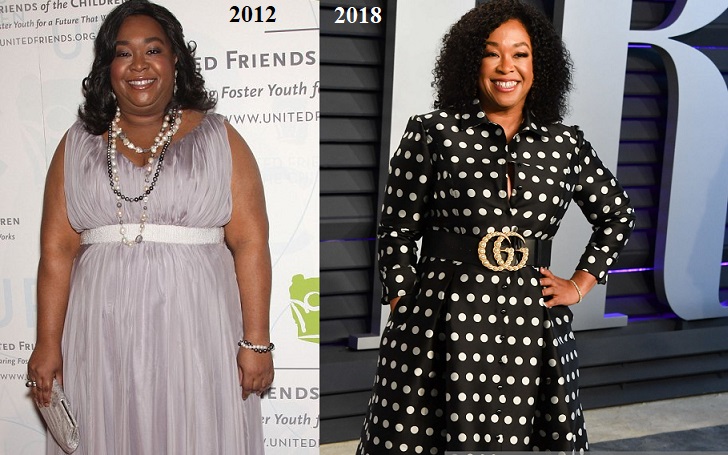 While weight loss stories for celebrities would be sources of inspiration for many, for Shonda Rhimes, it's been tough to be herself before and after her inspirational story. Before, she hated how she couldn't walk up the flights of stairs with ease, or attach the seatbelts in the airplane. And after, she felt weird people only noticed her since then.

Where the heck were you when she created and executive-produced the likes of 'Scandal', 'Grey's Anatomy' and 'How to Get Away with Murder'? Still, since welcoming unexpected invitations in December 2013, she's kicking it in losing a lot of weight.

Shonda Rhimes detailed parts of her almost-150-lb weight loss journey in her book, 'The Year of Yes', discussing how she succeeded in it since December 2013. She then also wrote in her Shondaland newsletter in June 2017 about how people started noticing her and treated her differently. But all she did it for was to walk up the stairs easily and mainly, to be there for her kids.

"I just decided I was going to get it together and get healthy," she told Extra TV at the 'PEOPLE, Entertainment Weekly and Essence's Shondaland #TGIT Party' in Los Angeles at the end that month. "I have some little kids, and I want to be around them."

Come Back To: What's the Real Deal with Chris Sullivan's Weight Loss?

"It really was about the fact that I have a 3-year-old, and a 2-year-old, and a 13-year-old, and I kind of wanted to be around for them, to be healthy," she also later told DeGeneres. "I'm super feminist, and I'm like, 'Everybody should be whatever shape they want to be, how dare anybody tell anybody anything!' – and then I thought like, 'I'm going to fall over, cause I don't feel good.' So it was really about that."

The Real Kickstart Was One Word That Resulted in the Book 'The Year of Yes' and a Byproduct...

If there's a point in her life that triggered her weight loss, it is obviously in November 2013 when one of her sisters mentioned she never said 'yes' to anything during Thanksgiving dinner. Of course, she had often declined the chance to go to galas, show, and such events.

Thus, it struck a chord in her as she decided to spend an entire year, saying "yes" to all the social and professional opportunities she often ignored. "Doing something you're afraid of makes it stop being something you’re afraid of," she said in the November 2015 issue of People.

Saying 'Yes' entirely turned things around. That led to the journey of being an author as she went on to write a book, 'The Year of Yes', but the weight loss thing was entirely a byproduct from her journey of acceptance.

"It was a crazy byproduct, somehow, of doing this," Rhimes explained. "The more stuff, the more fears I conquered, the more I felt like, 'Oh, I can do this, too,' or 'I can do that, too.' It was exciting. And I decided well, I'm going to try doing that. So yeah, I lost weight."

However, the moment she started getting on the journey was when she couldn't buckle her seatbelt on the plane. "I got on an airplane … it was a first class seat, you know, they’re bigger, and I was like: ‘This is going to be really comfortable,' " Rhimes told People. "And I got in my seat, I took off my shoes, I took out my book and I went to buckle my seatbelt – and it wouldn’t buckle. And I thought to myself, 'Well, something is wrong with this seatbelt, it’s broken.’ And it wasn’t the seatbelt, it was me."

Diet & Exercise Was All It Took, But It Wasn't a Rollercoaster Ride Either

'The Year of Yes' doesn't only discuss her journey to be accepting of several invitations in her life that could be beneficial for her. She's mentioned how she's managed to lose weight too.

"I work hard—that's how I succeed. That's how anyone succeeds. So why in the world did I think weight loss would be any different?" she wrote in the book. She mentions three important things to look in the diet, hire a professional personal trainer, eat only when you're absolutely hungry and drink more water. In fact, she drank 64 ounces of water every day.

It hasn't been a joyride, however. Despite crediting to eating better and regular exercise, she says she particularly "hated it the whole time."

"Once I decided it wasn't going to be fun, I lowered my expectations. It got kind of easier," she continued in the Extra TV interview. "I changed everything I ate — and I hated all of that — and then I hate exercising and I did that, too, and I hated it the whole time."

Still, she did not put full restrictions on her diet. "I actually eat everything I want to eat. I tried to make it much less and smaller portions, but what's happened is you change what your palate wants. I'm suddenly craving fish and salad," she continued, laughing it up. "It's upsetting! I'm like, where's my cake?"

It was all worth it in the end, as she lost a total of almost 150 pounds when 2017 came along. And she felt really good. "For me, it's never truly been about a number. It's just about feeling good. I feel good and really healthy," she said in the November 2015 issue of People. "Being a competitive person, having a number and a goal helps me. I feel great. And I’m going to work to stay in that space."

For years before her 'Yes' journey, she's been criticizing her own body and had trouble loving her body when she was young. And it's also part of the reason she occasionally never went out to important events either.

"I spent so much time picking it apart and trying to hide it and make it be shapes it never was going to be, that I missed a lot of things," the 50-year-old told TODAY Style in August 2017. "It's a struggle for women. Frankly, the idea that we need to be beautiful, if you really think about it, it's odd. But if you can turn it inward and see yourself as beautiful, that's what changes the world."

And after losing all that weight, there came up an issue of opposite polarity that made her hate discussing weight loss altogether. She details in her Shondaland newsletter how more than the way she lost weight, it was how people treated her after she lost weight that was "SO MUCH MORE HORRIFYING".

The attention she got was blinding. "And men? They spoke to me. THEY SPOKE TO ME. Like stood still and had long conversations with me about things. It was disconcerting," she continued. "But even more disconcerting was that all these people suddenly felt completely comfortable talking to me about my body. Telling me I looked 'pretty' or that they were 'proud of me' or that 'wow, you are so hot now' or "you look amazing!' "

So yeah, next time you talk to her, don't mention her or "the woman I used to be 150 pounds ago". She's stopped talking about her weight ever since. And she still hates all the process of weight loss she went through. She hated losing weight, but she loves the result. But leave her be, "because being thinner doesn’t make you a different person. It just makes you thinner."