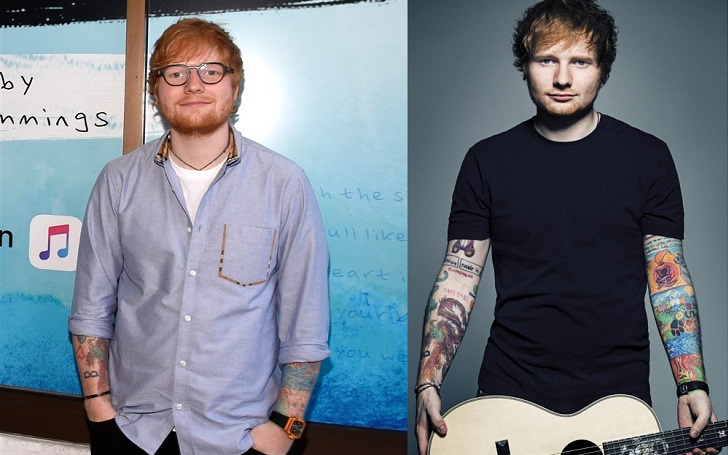 Ed Sheeran always wanted to be the best singer in the world, but he didn't realize that people expected a certain image once that popularity hits the roof. Of course, it's not about pleasing everyone else, but when there's a time a realization hits you, you should make yourself better. And that for him was when he didn't fit into any of his clothes following months of touring.

Like the dedicated weight loss-inspiring individuals in the music & arts industry, Sheeran also took that extra leap to maintain a healthier lifestyle. Although trolls and the industry expectations also had been a major trigger for him, in the end, he's found the things helped with weight loss that he now enjoys doing.

When mean comments prompted Ed Sheeran to lose weight, he was about 210-224 lbs after touring several times. His unmanaged diet (beer+pizza) with no exercise in those days was the main culprit as he did not leave it behind when taking a break from tours. But as he stopped smoking and started running outside, he lost about 50 pounds & now loves running and cycling for the mental benefits as well.

Ed Sheeran had been on the '× Tour' from August 2014 to December 2015, and while on tour, he ate pizza and beer as part of his diet. But it wasn't detrimental for his weight as he was pretty much active every time during the tour. You know, doing shows just drains the energy, and he needed the calories.

But once he returned home in 2016, he hadn't yet realized what the diet had done to him as he continued to only eat pizza and drink beer as part of his meal plan.

He did this one for charity, though.
Photo Source: Omaze

"I didn't realize how active I was on tour," Sheeran told Total Access on Signal 1 Radio in January 2017. "My diet was pizza and beer, but because I was doing two hours a night I was really in shape. I stopped touring and carried on my diet of pizza and beer. Suddenly I didn't fit in anything. I was like, 'All my clothes have shrunk.' "

After he had that realization, he took help from a professional. Kind of... His then-girlfriend, Cherry Seaborn, came to the rescue when he requested to put him on a diet and exercise plan. She's an athlete, at least, hockey player. And a little bit of cardio was all he did.

"I did 10 minutes a day without fail: intervals of 30 seconds and 30 seconds sprinting. The key is to not miss a day, so you don't have to do an hour," he continued.

Recommended: Sam Smith Had to Overcome Sadness to Lose Weight

The Routine Was Hard to Maintain in His Second Tour, But He'd Already Quit Smoking

And then the '÷ Tour' ended. He's never talked about his weight until December 2019, but it seems the tour made it difficult to continue a better routine, as he'd explain later. And his 50 pound+ weight loss was a process in the last few years.

In December 2019, he revealed how the tours were the most difficult part of looking after his weight but how he went on to love running despite not getting on the ride for most of his during-fame life.

"I didn't even touch exercise for a long time," Sheeran explained to 'Behind The Medal' hosts, Gary Damer and Dean Smith. "I was really into sports as a kid and then started music and started smoking, and then it all kind of went out the window."

Sheeran gave the untold details during the December 2019 podcast.
Photo Source: The Sun

"You finish a gig in America, you get a tray of chicken wings, sit in the back of the bus, watch 'The Simpsons,' drink a couple of bottles of wine, but then that's every single day," he explained how the USA tour was definitely the more difficult situation in terms of weight. "I kind of ballooned to like 15 or 16 stone [about 210-224 pounds]."

Suggested: Nicole 'Snooki' Polizzi is a Weight Loss Machine, But It's Not Bad

Since adopting a healthier lifestyle, under his now wife's guidance, of course, he lost 56 pounds at most [taking the higher limit of the range], as he weighed 168 lbs at the time.

He continued to tell the same thing he told last time, but this time, he revealed that he'd quit smoking about three years ago. That would be around late 2015 or early 2016. He started running outside to clear out his lungs and came to love running and cycling for the mental benefits as well.

"There's no way to check emails or watch TV shows," he said. "You are either with someone talking or thinking and it's a really good thing." He'd also like to run a marathon one day.

Trolls Were Also Big Part of His Weight Loss Journey

Remember the time when the 'Perfect' singer deleted his Twitter account back in 2017. Yeah, mean comments can become a huge thing for the musicians themselves, as for his BFF Taylor Swift, who's proud of his weight loss by the way, often gets.

"Whenever I've been big, there's always online trolls, or newspapers, or like, comments ... it's always like "chunky" or "fat" or whatever," he told the podcast hosts. "The first few years of my career, I was in the same sort of age as the 'One Direction' boys and Justin Bieber, and all these people that were really in shape and had six packs, and I was kind of like, 'Oh, should I be looking like this?' "

Also See: Mama June Shannon's Before & After Weight Loss Pictures Are Shocking, To Say the Least

He's never liked the way he used to look back in the day, but despite not having insecurities about it, the "weird" celebrity image expectations from the people made him notice it a little too much. "I never once had any insecurities really about myself until people pointed them out," he continued. "Your brain kind of starts thinking about them."

However, the trolls and the health kick just luckily intertwined to motivate him to lose weight. He could've just done with the former, but there was that situation when his clothes didn't fit.

Just let him keep performing. He's given you so much already.
Photo Source: Getty Images

He'd chosen not to appear in a number of his music videos as a result of how he didn't like the way he looked. And his friends also used to refer to him as 'Two Dinners Teddy'. "My problem was I'd go to the pub, have bangers and mash, a pie, maybe a pudding and then loads of pints. And then not exercise."

Now it seems, he's settled on his concerns and still continues to run & cycle, while smoking no more. But he's still eating what he wants. Just everything in moderation. "It's not a given that we were meant to have six-packs, it's not a normal thing to be that ripped. I exercise pretty much every day, but I eat and drink what I want. Have a beer. Enjoy yourself. Everything in moderation."