Home / health / Andrea Bocelli's Struggle Through Blindness — Get Some Inspiration

Andrea Bocelli's Struggle Through Blindness — Get Some Inspiration

Know the story behind how Andrea Bocelli became blind and defied the odds to become one of the best singers of the world.

The only thing worse than being blind is having sight but no vision. Despite the disability to not see for most of his life, Andrea Bocelli created wonders with his soothing songs and musical works to have a massive fan-following. Recently, he broke the YouTube record as his concert from an empty Milan cathedral amidst the CoronaVirus crisis became the largest classical live stream in YouTube history with more than 28 million views in its first 24 years.

Canadian singer Celine Dion once said, "If God would have a singing voice, he must sound a lot like Andrea Bocelli." The 61-year-old couldn't see the world, but he made sure he felt it right, thanks to his amazing music. To date, he recorded around 15 solo studio albums which sell all over the world. So, without wasting much time, let us delve into the inspirational story of the blind singer, Andrea Bocelli.

The life of Italian singer, Andrea Angel Bocelli was full of struggles since his childhood days. In fact, he was diagnosed with congenital glaucoma at an infant period of 5 months. That was just the beginning of a disaster in the opera singer's life as what followed next wasn't pleasing.

Andrea Bocelli became blind after suffering a head injury while playing football at the age of 12.
Photo Source: Wikipedia Commons

At the age of 12, he faced a severe blow to his head while tending goal during a soccer match. Serious implication did follow as he became blind for the rest of his life after that. Despite that, Bocelli didn't just gave up on life, but took the bold way instead and started performing in piano bars throughout Italy in the late 1980s. Prior to that, he also went to the University of Pisa and burnt the midnight oil for years to earn a law degree. As per his mom, music was the only thing that comforted Andrea and how he started taking piano lessons at the age of 6.

You May Also Like: Weight-Loss story of Renee Zellweger.

Before Andrea Bocelli was born to parents Alessandro Bocelli and Edi Bocelli, the doctors did warn the parents how they should abort the child with predictions that Andrea would suffer several disabilities. However, the world should thank them for not discarding the child with several problems, since the world would have missed out on a great musician if they aborted him.

Following the football match incident, Bocelli even suffered a brain haemorrhage. Although the doctors tried all their efforts to recover his eyesight by even using leeches, their efforts were unsuccessful, and he remained blind to this date.

Born on 22 September 1958, Andrea Bocelli is one of the most talented singers in the world, specializing in opera, classical and traditional pop. In fact, he released three greatest hits albums and nine complete operas, selling over 90 million records worldwide. Likewise, in 1998, he received the recognition of one of People magazine's 50 Most Beautiful People. Similarly, Bocelli also received the nomination for Best New Artist at the Grammy Awards in 1999.

The Italian further became the Grand Officer of the 'Order of Merit of the Italian Republic' in 2006. Moreover, the blind artist further got the honor with a star on the Hollywood Walk of Fame for all his contributions to the music industry. Kudos to his massive success, he accumulates a staggering net worth of $40 million as of April 2020.

One of his best albums came in 1999 itself, with 'Sacred Arias', which happened to be the best selling solo album in classical music history. In fact, it sold almost 20 million copies to guarantee a place in the Guinness Book of World Records. Furthermore, he received a Emmy nomination as well in 2000 and won the ECHO and Telegatto award too.

Andrea Bocelli: Married and a Father

Being blind never stopped Andrea Bocelli from living a normal life. Yet, it was his interest in music, which led him to meet his first wife, Enrica Cenzatti at the piano bar. The two went on to date one another, and eventually tied the knot on 27 June, 1992. Later, they went on to have two children, Amos Bocelli and Matteo Bocelli, also a singer. Even though, everything looked quite blissful in the singer's family, the inside story was different as the two parted ways with a divorce in 2002.

The blind singer further went on to marry for the second time in his life, to Veronica Berti, also his manager. The two met in 2002, gave birth to a daughter, Virginia Bocelli on 21 March 2012. The happy family reside at an enormous villa in Forte dei Marmi on the Mediterranean. 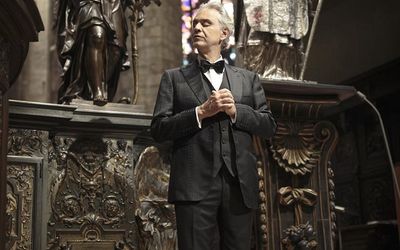