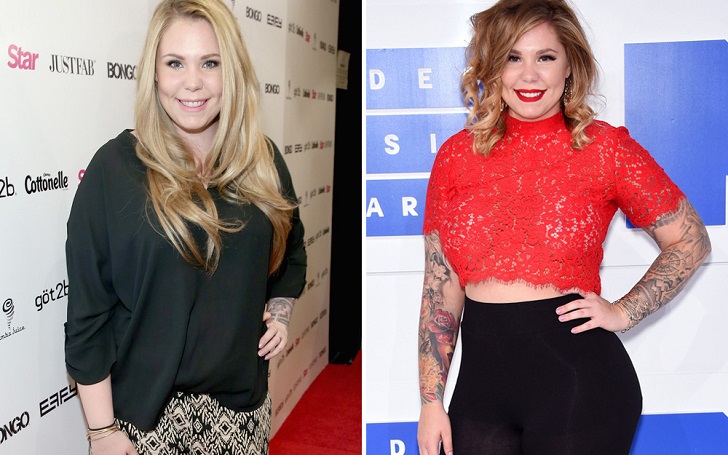 The 'Teen Mom' world is not new to it's cast undergoing multiple plastic surgeries and being completely transparent about it too. While Farrah Abraham has been the star of plastic surgery on the MTV's shows and its spin-off, Kailyn Lowry doesn't fare far behind either. She's just there.

Celebrities do try to hide the fact that they had any work done, and Lowry was also a part of it in her early days. But whether it was for the compulsion of broadcasting the entire thing on Snapchat by her doctor or not, she's come to embrace the fame cosmetic changes come with and updates her followers with every single work she'd done. Of course, she has admitted she wants to look and feel the best, even if it is with plastic surgery.

However, in recent years, Lowry seems to have opted out of having these kinds of works done as three kids is too much to care for, plus there's a fourth on the way too.

Kailyn Lowry's first child, son Isaac Elliot Rivera, was born in 2010, and she was on the MTV's first 'Teen Mom' show '16 and Pregnant' the same year before moving on to its spin-off 'Teen Mom 2' in 2011. Remember, this one is a different show from 'Teen Mom OG' that Abraham was once a part of.

When thinking about how far she's come since her first days in terms of plastic surgery, she's really done it all. But there was some reluctance from her to say what's true and what's not. That would only go forwards years later.

She got that smile alright.
Photo Source: Kailyn Lowry, Instagram

The first known cosmetic operation she's had was a quick & easy gum reduction surgery in February 2014. In a procedure of exposing more of her teeth, she improved on something she always wanted to do since taking her braces off. She got the smile she always wanted to make.

In a December 2015 photo on her Instagram page (not available now), she denied any rumors there was about having lip fillers as followers remarked her they were swollen on the show.

"No, I do not have lip fillers," she replied. To that, one fan tried telling her it's okay to have had her lips done. "Ain't no shame in lip fillers! But you most definitely do have them! We saw you super swollen on the after shows… Own it girl! They look great!"

However badly she might've denied the rumors, lip injection was a topic that would come later in her life.

Lowry Couldn't Hide of the Multiple Plastic Surgery Operations She and Briana DeJesus Had from Dr. Miami

By the way, how's the relationship of Lowry going with castmate Briana DeJesus? Yeah, despite having a little rivalry of their own, they do have one thing in common, their plastic surgery doctor, Dr. Michael Salzhauer, better known as Dr. Miami. He reportedly does these plastic surgery operations to stars that desire them for free if they allow him to broadcast them on Snapchat. So, there was no hiding it.

In January 2020, Lowry, DeJesus and her sister Brittany DeJesus traveled to Miami to get multiple plastic surgeries. For Lowry's part, she got liposuction, a tummy tuck, and a Brazilian butt lift. And she had the full support of her then-husband, Javi Marroquin, on Twitter.

You know people were going to ride on their decisions and tell them that exercise could've helped them with some of those procedures. But the doctor came to her defense when she needed it.

Check Out: How Rich Jenelle Evans Is

"All three girls had different issues with their bodies that they'd been dealing with, and really there is no way to improve what they wanted to improve through the gym," Dr. Miami told People. "She wanted to look great for him [Marroquin] when he returns, it's sweet."

Coming Back to Lip Injections: She Tells the Possible Reason for Her Swollen Lips Denial

Yes, they were kind of swollen in the past. But the reason she may have kept it to herself might've been because she was allergic to Botox and needed to have it removed time and again before.

In a 'Teen Mom 2' reunion special in June 2016, it was apparent she had them again. She then went on to Twitter to explain the situation. "Tried to get lip fillers and had a reaction. You should have seen them without lipstick."

More Questions from the Fans, This Time, Regarding Her Chest

The result of the plastic surgeries from Dr. Miami was clear and apparent, but between the time she returned from Dr.Miami and the time of her Puerto Rico vacation in July 2016, fans were noticing some subtle changes in her chest area.

The comment sections then boomed with questions of whether she had a breast enlargement surgery, despite the doctor not saying something about it.

Questions were pouring in on why she looked different.
Photo Source: Kailyn Lowry, Instagram

"I didn't know she had her boobs done too," one wrote. Another came to her defense. "They probably look bigger since she had her tummy tuck? Small waist so that's what makes them look bigger."

Recommended: Everything Draya Michele Said Regarding Her Plastic Surgery Rumors

This one, too, would become a discussion later on.

Lowry Explains It All in Her Book' Hustle and Heart'

Kail had already written two books before, one for children and one about herself. But when 'Hustle and Heart' was released in 2016, people got a glimpse back at her struggle with body image.

She explains in the book that her body image struggle started from home and that she was hurt by the negative attention she got for her body, going as far as the creation of "a Twitter page dedicated to me titled 'Hulk Kail'."

Lowry also set her specific reason for undergoing plastic surgery. "My decision to get plastic surgery came down to one simple thing: I'm human. I care how I look. I knew that being satisfied with my outer appearance would give me the confidence I needed to face the world head on. For me, the things that I wanted to change about my body were nagging little distractions from the deeper missions I wanted to work on."

More Work on Her Teeth: Veneers and Whitening

The mother-of-three took to Snapchat in 2017 to share she had more work to be done with her teeth. "I am going to the dentist to get my veneers done. They are super thin. No prep, no drill, no pain," she said at the time.

In an October 2017 discussion on Snapchat again, Lowry discussed some issues there were in social media regarding plastic surgery. Fans were speculating that she'd had more work done in her face than just the teeth or the lips. She denied every other rumor and indicated it was makeup that made her look that suspicious.

"People think I got cheek fillers, a nose job, a tummy tuck and my teeth done. Definitely only got my teeth done. I didn't do anything else to my face," she said. "... wore makeup for the first time in a long time. I still have a snout. I look pretty much the same."

The 'Hustle and Heart' author later also shared her excitement over acquiring a new Teeth Whitening solution rather than burning through a lot of money — HeyWhiteSmile Teeth Whitening Kit.

And: Melissa Gorga's Journey in the Cosmetic Remake Department

"I no longer have to spend thousands to whiten my teeth," she wrote in a now-deleted Instagram post. "My @HeyWhiteSmile Teeth Whitening Kit allows me to whiten my teeth On-the-Go! Super convenient! Plus it doesn't make my teeth sensitive like other products! I highly recommend it…"

In another October 2017 Instagram post, now-deleted, she praised a doctor for helping her with improving her skin. "Love @drsarmelasunder! Helping to get all my skin issues under control!"

After repeated fails with Botox, Lowry had finally settled on having no more plastic surgery operations since October 2017. The negative reactions were too much for her.

Enough was enough for her lips and plastic surgery in general.
Photo Source: MTV

"No more plastic surgery. I tried Botox, horrible fail for me. I'm done," she reportedly told RadarOnline at the time.

However, it was not the end of her journey in the cosmetics department. Yeah, it was not final. But by this point, everyone is aware of her endeavors later on.

A Complete Turn-Around from Having Another Multiple Plastic Surgeries

In January 2018, Lowry revealed something no one knew about but did suspect. That breast augmentation thing? Turns out, she did try to go through with it, along with a few other operations, in Miami with "the" doctor again but backed out of them at the last minute.

"I won't lie to y'all, i came to Miami for lipo & a boob job," Lowry posted on Twitter. "But hours before my surgery i decided i don't want to go through with it."

Instead of spending money on things like that, she actually thought of hiring a nutritionist and would be working out when she reaches home.

She might've remembered her words of no more plastic surgeries anymore then. So, does this mean Lowry was really done with such cosmetic changes via surgeries?

Lowry might've said she was done with it, but it doesn't stop viewers and fans from picking up every little detail she leaves behind from her TV appearances and social media posts.

One particular instance was when she appeared on 'The Domenick Nati Show' in early November 2019. At the end of the show, Nati reminded her that he is also a publicist for Dr. Salzhauer. And with the course of conversations, she says she needs to meet him again.

Is she really done with it though?
Photo Source: Getty Images

As for starting 2020 with something new, there was also talk of another possible visit to the doctor in the comment section of one of Dr. Salzhauer's post.

She commented on the post, asking, "Who wants to start the decade off with @drdaddky?" a mommy-makeover specialist, in his private Insta account, "So good!!! Can't wait to go next fall!!"

Of course, her fans were telling her otherwise. "Kail….girl…..just workout," one wrote on Reddit. "Kail!! FFS you have to still change your f**king eating habits you broad. No hate for wanting to look your best but you look like a balloon with lumpy, wet sand currently because you didn't change your lifestyle the first time post surgery. You have money, get a Peloton," another theorized.

For now, that upcoming baby is all that matters.
Photo Source: Kailyn Lowry, Instagram

Only time will tell if she will actually go through with it for the new decade. But for now, the fourth baby is the main thing she needs to have in her mind.