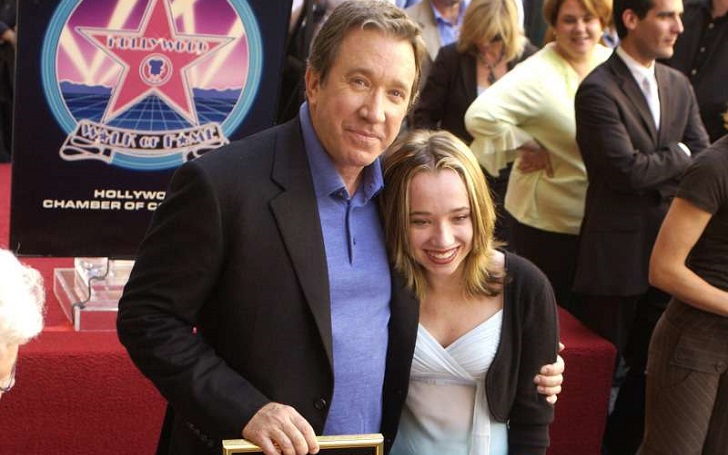 There are not a lot of celebrity kids who like to be under the spotlight when they get older, but not Tim Allen's first daughter. Still, daughter Katherine Allen, or 'Kady' as Tim likes to call her, hides away her personal life and does attend red carpet events with her father and her step-mother.

Yes, she is close to her step-mom, Jane Hajduk, Allen's second wife. But there are some things a father falls back in raising a child, and admittedly, Allen knows what he lacked as a father while raising Kady.

And while raising his second daughter, Elizabeth Allen Dick (19 years younger than Katherine), he does try to attend her important events, even the tea parties.

Tim Allen Was Away for the Most Part of Katherine Allen's Childhood, A Proof of Troubled Marriage

Tim Allen and his first wife, Laura Deibel, were together since they were studying at Western Michigan University. And even though his arrested for drugs, she waited for him to get released and then marry him. The movie world is glad he shortened his sentence by confessing the names of his dealers.

They got married in 1984, and five years later, Katherine was born. But it was also the time Tim's acting career took off. He was away most of the time, and that put a strain on his marriage to Laura. She was raising their child and maintaining their home alone.

You May Like: Get to Know Richard Dean Anderson's Daughter Wylie Quinn Annarose a Little Better

Laura also had chances to appear in the tapings of 'Home Improvement' on Friday nights. However, Bill Riback, the producer of the series, said "Laura wasn’t around all that much."

She was taking care of Katherine. And when he returned home in 1999 after eight seasons of 'Home Improvement', he had no clue his marriage was in trouble. Considering his father passed away when he was 11, he should've known better to make an example out of himself.

Katherine is close with her step-mom and step-sister as well.
Photo Source: Valerie Macon, AFP

During the red carpet premiere of 'Toy Story 2' in Los Angeles in 1999, the two were there with their 9-year-old daughter, all smiling, like a happy family. But four days later, they'd filed for divorce. In an interview with The Detroit News, as reported by People in 1999, she confessed, "I never see my daughter at all," and "I let my family slide," in pursuit of his career.

The divorce was finalized in March 2003. And Laura has been out of the spotlight ever since. But as for Katherine, she knows she's not the one to bail out on the family. She does stay in the spotlight, and Tim continues to speak fondly of her. But don't expect much of anything out of her either.

Learning from the Mistakes of Raising Katherine to Raise Elizabeth

It was a painful divorce, but Tim Allen did move on. He met his second wife, Jane, and after five years of dating, married her on October 7, 2006. But Katherine was still by his side.

Kady appeared with him on the red carpet during the honor of his star on the Hollywood Walk of Fame in 2004. And the striking resemblance of their smiles couldn't be ignored.

Also: Kenny G's Son Max Gorelick is Also a Musician But in a Different Genre

Katherine also attended her father's second private marriage celebration. In 2009, Elizabeth was born. And he did wish he'd been there for his first daughter like he's tried to be for his second daughter.

"I was gone so much in my first marriage. I love the moments when I engage with my youngest daughter now," she said in an interview with Parade. "It's not my thing to sit on the ground and play tea party, but I'll do it because it's a moment that will stick with me forever."

He is doing good with his older daughter and current wife.
Photo Source: SGranitz/WireImage

"I'm not the same guy I was the first time [I was married], when I was hiding and doing what people who drink too much do. I was not connecting," Tim told Closer Weekly in 2017. "But I've been sober for almost 20 years. I'm much more present."

He still jokes about how his two daughters still don't think he's funny. "The older one will roll her eyes, and the younger one just stares at me — I think she's done with me," she continued. "But I still try to play jokes and make them laugh."

For now, he is thankful for where he is right now. And it's obviously also attributed to being his first marriage and raising Katherine as well. And the marriage with Jane is also still going strong.

Stay tuned and connected to IdolPersona for more updates on celebrity children.