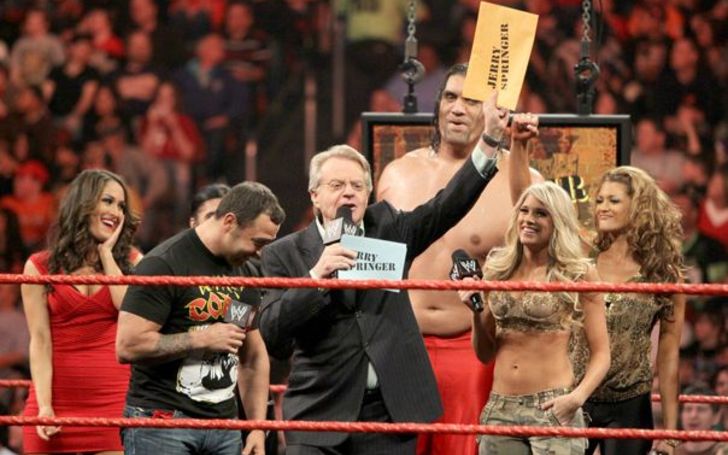 Will Jerry Springer be hosting the WWE Raw again? Read the article below to find out.

Jerry Springer makes very few appearances in WWE, but when he does, the show gets a whole new kind of excitement. Jerry Springer guest hosted WWE Raw in 2010 and 2014. During these appearances, we got to witness some of the most exciting episodes of WWE Raw.

Will Jerry Springer be making any new appearance in WWE in the coming future? The fans would love the host to reappear on the show to get some new level of entertainment. According to an article by Forbes, Vince McMahon may be planning to bring more "Jerry Springer Stuff" into WWE following the event of the series presenting the wedding between Lana and Bobby Lashley. The reaction to the episode was overwhelming, and fans loved it. Well, we don't know yet, but McMahon may bring the man Jerry Springer himself in the show to stir things up.

Jerry Springer may make an appearance on WWE in the coming future.
Source: Bleacher Report

The host of 'The Jerry Springer Show' first appeared in the WWE Raw on 10 February 2010 at Wells Fargo Arena in Des Moines, Iowa.

Jerry - who got divorced in the 90s - started the program stating that it will be a special edition of the show titled 'The WWE's most intimate relationships revealed.'

The first reveal of the episode was a jaw-dropping one. Jerry called the female wrestler Kelly Kelly on the ring, where she shouted, "I am pregnant!" That drew lots of boos and ohs from the crowd.

Jerry was surprised and asked her who the father was. Kelly hesitated to answer at first, but when she was about to answer, Santino Marella makes an entrance suggesting he was the Baby Daddy.

But Santino does not turn out to be the father. Then the WWE commentators start debating to claim themselves as the father and get on the ring.

When everyone is talking to each other on the ring, the Bella Sisters show up. They come to the ring, and Nikki tells the audience that Brie is the man behind Kelly's pregnancy, which breaks out a little fight between the sisters Nikki and Brie.

Also see Charlotte Flair was Divorced Twice - Who is Her Current Husband?

When Jerry asks the sisters who really was the man with Kelly in the night she got pregnant, Chris Masters enters the arena. Kelly then reveals Chris was the father as she "couldn't resist those packs."

Then Chris's actual lover appeared in the arena and tried to confront Kelly. They started to fight with each other but then get separated by the security officials. As Chris's lover asks him why he slept with Kelly, he answers that he was not satisfied by her. Enraged, she reveals that she is already cheating on him with The Great Khali.

The Great Khali then appears, but Santino re-shifts the subject to the original one and wants to know who the father is. Jerry Springer steps forward, showing the documents containing the results of the paternity test and reveals Hornswoggle to be the father.

The father of Katie Springer, confused by the absurdity of all of these revelations, proceeds to leave the arena. As Jerry is about to exit, one of the commentators calls out to him and discloses that all of these were acts to fool Jerry. The commentator then turns the table on Jerry, saying it will actually be Jerry's intimate revelation, which turns out to be Mae Young.

When Springer appears on the WWE Raw, he adds something new that makes it more exciting. His next appearance did not disappoint either, but that's for another article some other day.